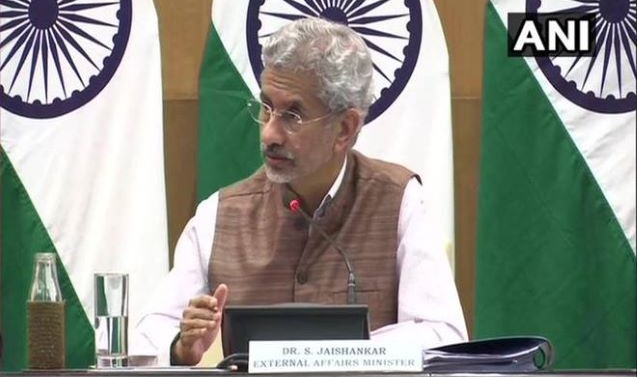 Pakistan, which has been strikingly belligerent after New Delhi scrapped special status for Jammu and Kashmir, has accused India of human rights violations and more or less, held out threats of war. Foreign Minister S Jaishankar on Tuesday delivered New Delhi’s sharp comeback to the many threats that Islamabad had held, spoke about India’s “expectation” that it would gain control of Pakistan-occupied Kashmir one day and hurled a few darts at Pakistan as well.

Jaishankar also responded to Pakistan Prime Minister Imran Khan’s remarks that there was no use talking to India. Talking, Jaishankar shot back, was all that Pakistan had done for years without acting against terrorism.

“They think nice words are an answer to the real problem. The real problem is the dismantling of this (terror) industry that they have created,” he said at a media interaction on Tuesday where he responded to several questions on Pakistan.

There was also a question on the message that US President Donald Trump’s presence at Prime Minister Narendra Modi’s Houston diaspora event would send to Pakistan. Jaishankar counted President Trump’s acceptance of the invitation from the India-American community as a mark of respect that the community had earned in the US.

“Communities and countries develop a reputation, he said, underscoring a point made by Prime Minister Narendra Modi in Afghanistan when he had contrasted how IT, because of the difference in reputation of the two neighbours had different meanings in context of India and Pakistan; Information technology in reference to India and international terrorism in Pakistan’s case.

Jaishankar said there were multiple messages in the Modi-Trump event. “It is for pakistan to read what they wish to and the same applies to others as well,” he said.

The Foreign Minister, asked about atrocities against minorities in Pakistan, said this wasn’t a new thing. “Here’s a country which is waxing eloquent about other nations. Look at their treatment of minorities, I think minority number has come down dramatically in last 70 years to a point where they don’t even put it out publicly anymore,” he said.

“What is happening now in Sindh (Pakistan) is not the only thing which has happened in the last 100 days. You also had cases of abduction of Sikh girls. I think if there is a human rights audit today in this part of the world I can pretty confidently assert who’ll come last in it,” the minister said.

Jaishankar’s comments come against the backdrop of minority community leaders increasingly speaking out against atrocities and human rights violations.

If there is “a human rights audit today in this part of the world, I can pretty confidently assert who’ll come last,” Jaishankar said, taking a sharp swipe at Pakistan.

The remarks came following the incident of Jagjit Kaur, 19, who went missing for a number of days, was found on Thursday after she was forcibly converted to Islam and made to marry a Muslim man. Daughter of Bhagwan Singh, a ‘granthi’ (priest) of Gurudwara Tambu Sahib, she was converted to Islam at gunpoint.__Hindustan Times