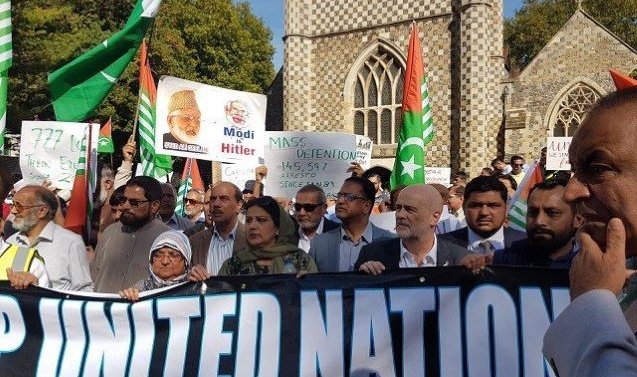 MUZAFFARABAD: As residents of Indian Occupied Jammu and Kashmir continue to suffer under the weeks-long Indian lockdown, thousands of British-Kashmiris marched through the streets of UK’s Reading town for their right of self-determination.

Carrying placards and flags of Kashmir, protesters shouted slogans against brutalities being committed by the Indian troops in IOK and urged the world community to help end the curfew that has been in place there since August 5, holding more than 80 million innocent people hostage.

British and European members of parliaments also participated in the protest, urging the international community to play their part in ending the humanitarian crisis.

“International observers must be allowed to visit IOK to end the violence being committed by Indian forces to ensure peace in the region,” he added.

Member of British Parliament (MP) Matt Rodda, speaking on the occasion, expressed concern over the current situation in IOK. He said human rights are being violated in Occupied Kashmir and the issue must be resolved as per the wishes of Kashmiris.

“Keeping the critical situation of IoK in view, we appeal both Pakistan and India to come forward and settle this issue on humanitarian basis as thousands of Kashmiris living in UK and other parts of the world who have no contact with their families and kins in IoK which is the worst kind of basic human rights violation and must be stopped immediately.”

President Tehreek-e-Kashmir UK Fahim Kayani said the protest was staged to show solidarity with the oppressed people of IoK, who have suffered for more than 70 years under brutal Indian occupation, subjugation and oppression.

“Kashmir has been under siege since August 5… [Indian Prime Minister Narendra] Modi has adopted polices of dark ages when Kings used to put cities under siege by cutting off their supplies to make them to bow down to their terms and conditions.

He said the Indian rulers wanted to people of Kashmir to surrender themselves to the Hindutva ideology of fascist BJP regime. Kayani said sacrifices of Kashmiris have proven that they will never compromise on their basic right of self-determination.

President TeK Europe Muhammad Ghalib condemned the Indian atrocities, saying more than 25,000 Kashmiris have been arrested and there is a complete communication blackout in the valley since August 5.

Referring to a BBC News article with headline “Don’t beat us, just shoots us”, Ghalib maintained that Kashmiris’ spirit will never be defeated by India.

Zaffar Qurashi, a resident of Occupied Jammu and Kashmir, informed protesters that the Indian troops enjoy impunity under black laws. “They use molestation as a weapon of war… silence of world powers over the killing of innocent Kashmiris is a crime against humanity,” he stressed.__Tribune.com