Home / Kashmir / ‘Kashmir now a flashpoint, has potential of turning into nuclear war’ 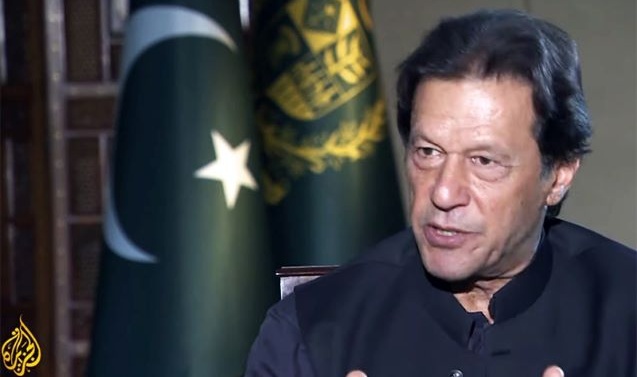 Prime Minister Imran Khan has urged the international community to play their due role in resolving the issue of occupied Kashmir and warned them that the dispute — which has now become a flashpoint between India and Pakistan — has the potential of turning into a nuclear war and impacting the entire world.

In a wide-ranging interview with Al Jazeera, the prime minister said that Pakistan has limited options on the issue of occupied Kashmir.

“Absolutely, there is not much we can do except approach all international organisations that were setup after the first world war, mainly the United Nations,” he said, adding that the United States, China, Russia, European countries are all being approached by Pakistan over the matter of occupied Kashmir.

He expressed his resentment over the cold shoulder being showed by the modern world towards the issue of Kashmir, and said, “Unfortunately, because of this whole thing about big markets, [some] countries look at big markets, they look upon India as a market of one billion people, they don’t realise that if they do not intervene right now, it will have consequences for not only the subcontinent but the world’s trade — everyone will be affected by this.”

Asked if he shares concerns voiced by Foreign Minister Shah Mahmood Qureshi about an accidental war between the two nuclear armed powers, he said: “Absolutely. What is happening is that India is more or less conducting a genocide. The sort of racial attacks [made] on the population, I don’t think it has been witnessed since Nazi Germany. The eight million Muslims in Kashmir are under siege for almost six weeks now. And why this can become a flash point between India and Pakistan is because what India is trying to do is divert attention from its illegal annexation and their impending genocide in Kashmir.”

“They are taking attention away by blaming Pakistan for terrorism. And this is what they did last February when there was a suicide attack by a young Kashmiri boy, blowing himself up against an Indian military convoy and India blamed Pakistan for it and then bombed us,” said the prime minister.

“So we fear that this will happen again because what they are doing in Kashmir will lead to a reaction, some sort of reaction, and they will then blame Pakistan for it to divert the world’s attention from the genocide in Kashmir.”

Talking about the country’s policy on first use of nuclear weapons, he said: “There is no confusion. What I said was that Pakistan would never start a war and I am clear [on this]. I am a pacifist, I am anti-war but what I said clearly was that when two nuclear armed countries fight — if they fight a conventional war, there is every possibility to end up in a nuclear war.

The premier warned that if a conventional war were to be fought “Pakistanis will fight to the death for their freedom”.

“When a nuclear armed country fights to the death, it has consequences. That is why we have approached the United Nations and are approaching every international forum urging them to act right now because this is a potential disaster which would go beyond the Indian subcontinent.”

Message to be delivered at the UNGA

Talking about his address at United Nations General Assembly later this month, the premier said, “Under normal circumstances, I would have talked about climate change. Pakistan is one of the few countries that are most vulnerable to climate change. I would have spoken at length on that and secondly on Islamophobia: the way Muslims suffer due to Islamophobia, particularly in the western countries and off course in India.

“But because of what is happening in Kashmir, I would be mainly talking about the Kashmir situation.”

Dialogue or no dialogue

He said that the only issue was Kashmir and must be resolved through a political settlement which is why trade is important between Pakistan and India.

“Now, I realise that this (our overtures) were misinterpreted. This BJP (Bharatiya Janata Party) extreme right wing, racist, fascist government was treating us as if we were scared of them and they took it as appeasement,” he added.

PM Imran said that the government discovered that all the while they were trying to establish a dialogue, India was trying to “push us in the black list of the FATF”.

“We are on the grey list. If Pakistan is pushed into the black list that means that there will be sanctions. So they were trying to bankrupt us. That is when we pulled back and that is when we realised that this comes under an agenda.”

“The agenda was to push Pakistan into disaster. So there is no question of talking to the Indian government right now (especially) after they revoked Article 370 of their own constitution and annexed Kashmir illegally,” he said.

He called attention to the fact that the move was made against the United Nations Security Council’s resolutions which had guaranteed that the people would be able to hold a referendum and plebiscite to decide their destiny.

“They have unilaterally not only broken international laws but also their own constitution so there is no question of talking to India in these circumstances,” he reiterated.

The prime minister, while talking about US President Trump’s offer to play a role for dialogue between Islamabad and New Delhi over Kashmir, said, “We are thankful to US President Trump because he is the president of the most powerful country in the world and if the president of the US intervenes in this and seriously intervenes, it is one way that you can guarantee some sort of resolution.

“Secondly, even if it doesn’t intervene directly, the US has power in the UNSC. You see, that’s why I think India is stonewalling this suggestion, because India knows if once the international community gets involved then the ruling will be for the people of Kashmir. The international community insist on the people of Kashmir exercising their right of their self determination.”

“Purely from a human point of view, everyone wants to help Afghans get peace, therefore Pakistan is playing its part. Whatever little influence we have on the Taliban, we have asked them to go to the dialogue table,” he said.

Talking about the abruptly ended dialogue between the Afghan Taliban and the US, he said that the talks with Americans were at a pretty advanced stage.

“The only thing was now to get the Taliban to talk to the Afghan government so they all get together and decide what they want to do.”

“Now, this is unfortunate what has happened.”

“The idea of dialogue and fighting at the same time is always tricky. I hope this [suspension in dialogue] is a temporary thing. I hope that President Trump will get the talks going again, because there is no other solution. There is not going to be a military solution.

“The only way out is getting back to the dialogue table.”

No comments on Uighurs, China is ‘best friend’

Talking about the treatment of the Chinese government towards the Uighurs (the indigenous Muslim population), he said he hadn’t spoken about the issue in his discussions with government representatives.

“Frankly, we have been facing so many of our internal problems right now that we haven’t…I don’t know much about this problem,” he said.

“Ever since we have been in power for one year, really, we have been inundated with problems. But I will say one thing about China: For us China has been the best friend.”

“At the moment, my responsibility are the people of Pakistan. I have 210-220 million Pakistanis I am responsible for. Therefore, my number one effort is to help my own countrymen,” he said.

“I don’t know where he is right now, but last I know, he was in jail. For him to say a thing like that, let me make one thing clear: ever since my government has come into power, we have — this one government — has pledged that every citizen regardless of his religion will be an equal citizen.”

He then went on to describe the efforts made thusfar in this regard.

“Our government has opened up the Kartarpur Corridor, made great efforts for the Sikh community in opening up their religious sites. We are going to open up all the religious sites of all different religions, like Hindus, Sikh religion, the Christian community.

He further said that the difference between Pakistan and what the RSS-backed BJP government is doing in India, is that “when they mistreat their minorities, it is according to their ideology. They do not believe that minorities are equal citizens”.

Crackdown against media is myth

“This is utter and utter nonsense,” said the prime minister when asked about a reportedly fast shrinking space for dissent and a crackdown against media.

Pakistan is one of the freest places in the world when it come to the freedom of media, he added.

“Members of the media have said things against me and against the government. They would never have gotten away under any other democracy. They made personal attacks against me. Had there been any other democracy, the TV channels would have closed down. The freedom that journalists have in this country is unprecedented.

“This is one of the most tolerant governments ever. Although we think we have gone overboard. We think we will strengthen our regulatory body,” he said.__Dawn.com