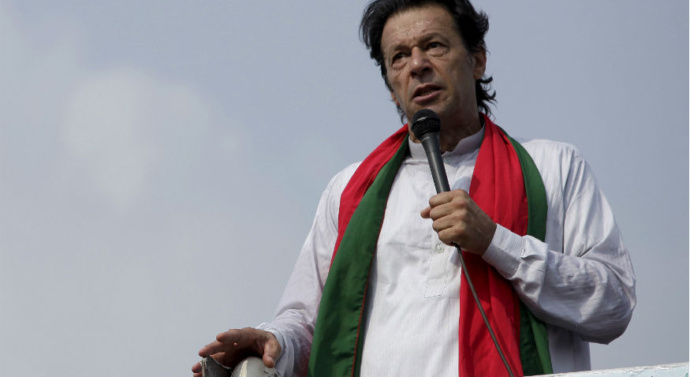 The continued crackdown in Indian-administered Kashmir is “pushing more people into extremism”, Pakistan’s Prime Minister Imran Khan has warned.
Speaking at a rally in Muzaffarabad, capital of Pakistan-administered Kashmir, on Friday, Khan added that he would present Kashmir’s case at the United Nations General Assembly in New York next week.
“When atrocities reach their peak, people would prefer that death is better than this insulting life,” Khan said at the rally attended by thousands.
“The Kashmir issue today is a humanitarian problem.
“I want to tell India that, by detaining thousands of people, you are pushing people into extremism. People will rise against India, and it is not just about Indian Muslims. There are 1.25 billion Muslims around the world. They all are watching this.”
Since India revoked the special status of the part of Kashmir it governs on August 5, at least 4,000 people have been arrested and cases of abuse and torture have been reported.
A presidential decree revoked the autonomy of the region under the provision of Article 370 of India’s constitution that guaranteed special rights to the Muslim-majority state, including the right to its own constitution and freedom to make laws on all matters except defence, communications and foreign affairs.
The Indian government has said the abolition of Kashmir’s special status, which had allowed it to write many of its own laws, is meant to help to “combat terrorism” and to boost the region’s economic development.
About two-thirds of the population of Jammu and Kashmir is Muslim, while India has an overall Hindu majority.
In the lead up to the move, India sent thousands of additional troops to the disputed region, imposed a crippling curfew, shut down telecommunications and internet, and arrested political leaders.
On Thursday, the Pakistan prime minister also thanked the rest of the world for its support for Kashmir.
“I commend 58 countries that joined Pakistan at the UN Human Rights Council on September 10, reinforcing demands of international community for India to stop the use of force, lift the siege, remove other restrictions, respect and protect Kashmir’s rights, and resolve Kashmir dispute through the UNSC resolutions.”