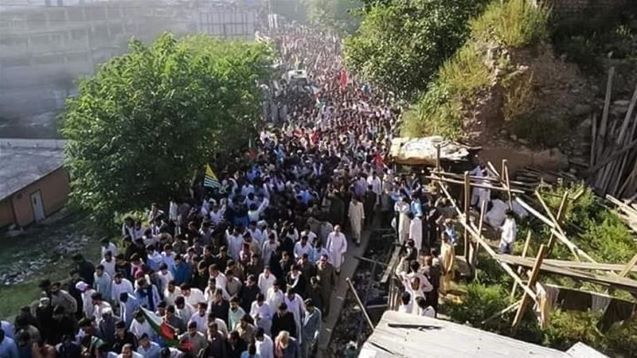 Islamabad, Pakistan – Police have arrested at least 22 people at a pro-independence protest in Pakistan-administered Kashmir after clashes broke out between authorities and demonstrators, according to police and activists.

On Monday, a sit-in continued at the site of the clashes, police said. Mobile phone service in the remote area was disrupted, complicating reporting of the situation by the media.

District police chief Tahir Mahmood Qureshi told Al Jazeera police tear-gassed the protesters on Saturday when they attempted to get closer to the Line of Control because they were leaving a designated protest space.

“We were giving them a safe route, but they wanted to go to an exposed area where Indians could have shelled them,” Qureshi said.

India and Pakistan frequently violate a 2003 ceasefire agreement at the Line of Control, with both sides blaming each other for killing civilians and security forces on opposite sides of the de facto border.

“Indian shelling has hit people in our area,” said Qureshi. “We did not want innocent people to be killed because of them [the protesters].”

The protesters belonged to a faction of the Jammu and Kashmir Liberation Front (JKLF), a prominent Kashmiri political party that advocates for independence from both the countries for the territory.

“Our main demand is that the international community must take steps to resolve the issue of Kashmir and take steps to send back the armies of both countries [from Kashmir],” Toqeer Gilani, a senior JKLF leader in Pakistan-administered Kashmir, told Al Jazeera.

Gilani, who was at the protest site, said more than 40 JKLF members had been arrested overnight, and that they were being pressured to end their protest.

Qureshi denied the protesters were arrested for their political views, saying the action was taken because they had acted illegally.

“They have not been arrested on their stance on independent Kashmir or anything like that,” he said. “They are criminals.”

Qureshi said one police officer was critically wounded in the clashes, and remained in hospital under treatment, and that several others had been hurt by protesters hurling large rocks down a mountainside at them.

Nuclear-armed India and Pakistan have fought two of their three wars over the disputed territory, which both claim in full but administer separate portions of.

On August 5, India scrapped a constitutional provision that accorded Indian-administered Kashmir special status, revoking special rights to the Muslim-majority state, including the right to its own constitution and autonomy to make laws on all matters except defence, communications and foreign affairs.

Before the move, the region saw a surge in Indian troops and the imposition of a curfew thereafter that remains in effect in most of the territory.

Communications, including telephones and the internet, have also been suspended in most of the territory by Indian authorities, and hundreds have been arrested.

JKLF protesters began their sit-in in Tatrinote on Friday, demanding an end to the Indian restrictions and for the international community to step in the crisis.

“The first and main demand of the sit-in is that there has been cruelty and oppression that is taking place in Indian-occupied Kashmir in the last 35 days – people’s lives have been restricted, they are in danger, many people have been arrested,” said JKLF leader Gilani.

“The international community must ensure that the cruelty and oppression be ended. That the curfew be lifted, political prisoners be released.”

Pakistan’s government has been lobbying world leaders to intervene in the situation, a position India rejects, saying the crisis is “an internal matter”.

Tensions between the countries have, meanwhile, remained at fever pitch since the August 5 decree, with both countries mobilising military units near the border.

Pakistani Prime Minister Imran Khan has said that Kashmiris should be given the right to self-determination, but Pakistan’s authorities have been known to restrict the activities of pro-independence groups in favour of those who support accession to Pakistan.

In Tatrinote, the pro-independence sit-in continued peacefully on Monday, police and activists said.

“The protesters are full of passion – they are being told to leave by authorities but they are staying there for now,” said Gilani.__Al Jazeera