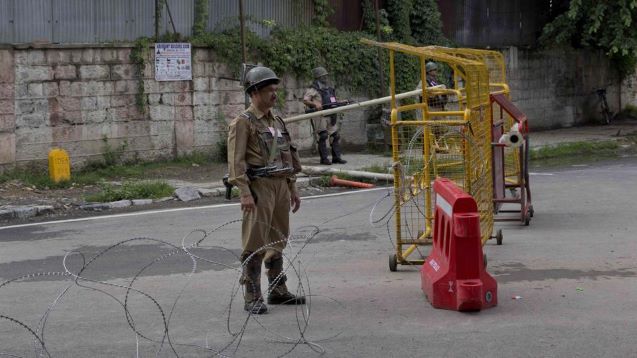 Authorities imposed fresh restrictions under Section 144 CrPC in most parts of the city following apprehensions of law and order post Friday prayers.

Scores of Shia mourners including a woman were injured after police used force to quell peaceful Muharram procession at Botakadal area in old city, reports and witnesses said.

Shops and business establishments and fuel stations remained closed across Kashmir while attendance in government offices was recorded constantly thin. Barring titular movement of private vehicles at some Civil Lines and uptown localities, public transport continued to remain off the roads.

Traffic movement was also affected on Srinagar-Jammu national highway with only vehicles of army and paramilitary forces visible on strategic road which connects valley with rest of the country.

Telecommunication continued to remain suspended in the restive valley even as the authorities restored landline services everywhere on Friday.

Reports said that the people in Soura area on the outskirts of Srinagar again hit the streets post Friday prayers to protest centers decision of abrogating provisions of Article 370 and bifurcation of state into two Union territories. However, no stone pelting incident was reported in the area.

Police, according to locals, had pressed drones into service to keep a close watch on people’s activities in the area which witnessed violent clashes on several occasions in recent past.

Although there were no restrictions in Civil Lines or uptown localities of Srinagar, however, the roads remained dotted with police and paramilitary forces as a precautionary measure to maintain law and order.

In the old city, roads were blocked with razor wires and iron barricades amid thick deployment of police and paramilitary forces following fresh restrictions imposed there to thwart any law and order situation.

A senior official in the administration said that imposing restrictions in old city is a routine process to avoid law and order situation. He said the situation remained comparatively calm with no untoward incident reported from anywhere.

Situation in other districts reports said was no different as the markets remained closed and public transport remained off the roads prompting people to stay indoors.__Kashmir Times