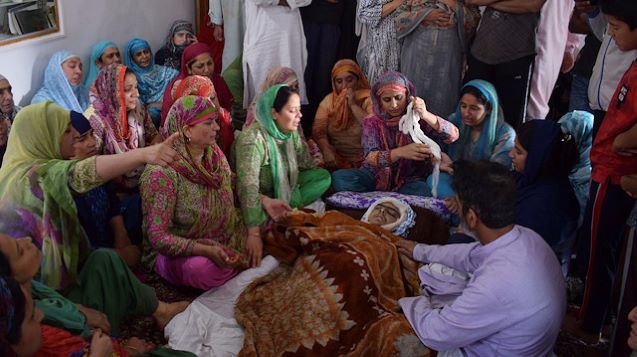 SRINAGAR, Aug 4: Fresh restrictions were imposed in parts of Srinagar city on Wednesday following death of a youth who was critically injured after being allegedly hit by pellets during protests at Soura area on the city outskirts here last month.

The death of 17-year old student, who has been identified as Asrar Firdous Khan, son of Firdous Ahmad Khan of Elahibagh, Buchpora triggered protests and clashes in the area, reports said.

The class 11th student, according to reports, was critically injured after being hit with pellets during protests in Soura on August 6 last, a charge denied by the police.

Additional Director General of Police (ADGP) Law and Order, Muneer Ahmad Khan while denying the reports of youth having died due to pellets said “he was hit by the stone which led to his death”.

Authorities fearing ‘deterioration’ of law and order imposed fresh restrictions in most parts of the old city. Roads were sealed with iron barricades and spools of concertina wires to prevent public movement while thick deployment of forces was made to avoid any uncertainty.

Large number of people attended funeral prayers of the slain youth who according to reports succumbed to injuries this morning. Slain according to family sources was put on ventilator for around a month after suffering critical pellet injuries.

A civilian was also reportedly injured after unidentified persons hurled a petrol bomb to ensure shutdown in Bemina area near Sabzi Mandi. Reports said the attack was aimed to ‘coerce’ road-side vendors who had allegedly setup their stalls in the area.

Meanwhile, normal life continued to remain disrupted in the restive valley due to shutdown on 30th running day today even as the administration claimed to have eased day time restrictions in 92 percent areas in Kashmir.

Shops and other commercial establishments remained closed across Kashmir while public transport was off the roads, however thin movement of private vehicles could be seen on the roads. Attendance of employees in government offices continues to remain thin while schools opened up to High school level witnessed nominal attendance of students.

Pertinently the government of India scrapped Article 35A which gave special status to Jammu and Kashmir and divided the state into two Union Territories after passing a bill in the Parliament on August 5.

The state government imposed stringent restrictions under section 144 crpc and snapped all modes of communication across Jammu and Kashmir on August 4 midnight few hours before the bill rescinding special status of the state was passed in the parliament.__Kashmirtimes