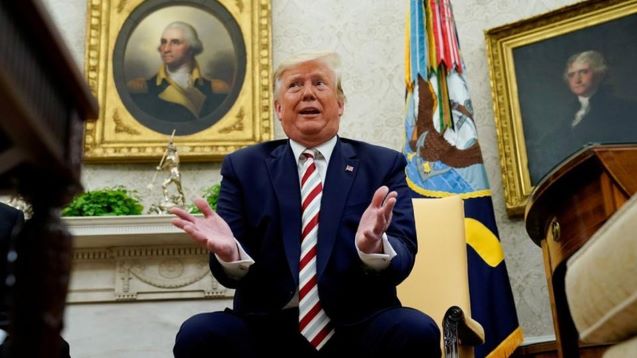 US president Donald Trump on Thursday said his administration was “seriously” looking at ending the right of citizenship for babies born to non-citizens, a 140-year-old constitutionally mandated law that anti-immigrant groups allege has been abused by undocumented immigrants and those involved in so-called “birth tourism”.

Trump had called for its revocation as a candidate for the White House and then announced last October he intended to do it through an executive order.

Ending the law is a long-shot proposition as it was established by the US constitution’s 14th Amendment in 1868, which was enacted in the aftermath of the civil war to grant citizenship rights to African Americans. “All persons born or naturalized in the United States, and subject to the jurisdiction thereof, are citizens of the United States and of the State wherein they reside,” it reads.

Democratic senator Kamala Harris, who is running for the White House, was quick to remind the president, and rebuke him. “This president should “seriously” consider reading the Constitution,” she wrote on twitter..”

Critics of the law have long held that it has ben abused by undocumented immigrants and an entire industry that has come up around “birth tourism”, in which foreign pregnant women pay huge sums to racketeers to arrange for them to come o the US, stay and give birth to their children, which would guarantee the babies US citizenship, and return.

Conservative Center of Immigration Studies estimates that around 36,000 “birth tourists” come to the United States annually, but has said it was difficult to determine their countries of origin because the “the practice is largely clandestine”. But news reports have pointed to Russia and China, largely.

But most Americans — 6 out of 10 — opposed changing the law, Pew found in a study in 2015, before Trump announced his White House run. Democrats opposed it 75% to 23%, but Republicans appeared split, with 53% in favor of amending he law and 44% opposed to it.__Hindustan Times