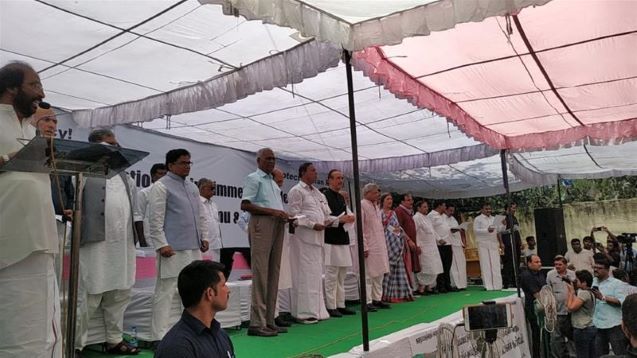 New Delhi, India – Major opposition parties in India have joined forces to protest against the government’s clampdown in Indian-administered Kashmir, demanding the immediate release of political leaders and the restoration of communication services in the Himalayan region.

Thursday’s protest in New Delhi came as the Muslim-majority state continues to remain on edge in the wake of the Hindu nationalist government’s decision earlier this month to revoke the special status accorded to Jammu and Kashmir that provided it with limited autonomy.

In the lead-up to its decision on August 5 to scrap Article 370 of the Constitution, India sent thousands of extra troops to the contested region, imposed a curfew, shut down telecommunications and internet services and arrested political leaders.

Top opposition figures addressed the New Delhi protest, which was organised by Dravida Munnetra Kazhagam, a regional party from the southern state of Tamil Nadu.

“The ruling Bharatiya Janata Party and its ideological wing, RSS, are celebrating the abrogation of Article 370, while the majority of people don’t even know what the Article is, “Ghulam Nabi Azad, of the Indian National Congress, told the hundreds of people in the crowd.

Rashtriya Swayamsevak Sangh (RSS) is a Hindu supremacist organisation that wants India to be defined as a Hindu nation. Indian Prime Minister Narendra Modi is a lifelong member of RSS.

“They are cheating the people by saying they have restored the communication by restoring a few telephone lines. Only government officials have landlines. So, is this facility only for officials? There is a complete communication blockade,” added Nabi Azad, who is the leader of opposition in the upper house of parliament.

Protesters shouted slogans such as, “Release the political leaders detained in Jammu and Kashmir,” “Restore telecom services in the valley” and “Awaaz do hum ek hain (Call out loud, We all are one).”

The opposition parties unanimously rejected the “undeclared state of emergency” in Kashmir and demanded the immediate release of all public representatives of “mainstream” political parties and civilians.

Among the political leaders arrested in Kashmir are Farooq Abdullah, a member of India’s parliament; Omar Abdullah and Mehbooba Mufti, former chief ministers of Jammu and Kashmir; and Shah Faesal, a bureaucrat-turned-politician. Meanwhile, thousands of people have also been detained, according to reports.

Dinesh Trivedi, of the All India Trinamool Congress party, said the “agenda” for Thursday’s event was the release of political leaders and the return of “normalcy” to the state.

“My question is what have the leaders detained in Jammu and Kashmir done [to be] placed behind bars? It’s our right to ask such questions. If they have committed any crime, punish them by the rule of the law but at least we have the right to know the crime,” he said.

His comments were echoed by Maimoona Mollah, a social activist and a member of the All India Democratic Women’s Association.

“Why are leaders behind bars?” she asked. “This is a common question in the minds of all. If the government has no answer to this, it means there is something fishy.”

Mollah was a part of a four-member team of civil society members that visited Kashmir for five days after the revocation of the state’s special status.

“The words we heard over and over from people about the Government decisions on J&K were ‘zulm’ (oppression), ‘zyadti ‘ (excess/cruelty), and ‘ dhokha’ (betrayal),” read a 10-page report by the team.

“One man in Safakadal (central Srinagar) put it, ‘The Government has treated us Kashmiris like slaves, making decisions about our lives and our future while we are captive. It’s like forcing something down our throats while keeping us bound and gagged, with a gun to our heads,'” it added.

For his part, Communist Party leader D Raja told the crowd in New Delhi that Modi was following the RSS’s agenda and harming the country’s interests.

“We have betrayed the people of Jammu and Kashmir, caged them and arrested all their leaders. If leaders like former chief ministers of the state are facing troubles, we can only imagine the plight of common people.”

However, the BJP maintains that the communication blockade and the detention of leaders were done with “the best interests” of the people of the Kashmir valley in mind.

“There were apprehensions of rumour-mongering by these leaders so we had to detain them,” Harish Khurana, BJP spokesperson, told Al Jazeera.

Many Kashmiri students attending the protest in New Delhi expressed dismay and anger at the situation back home, but also rejected the speakers’ focus on the detentions of politicians.

“Eight million people in Kashmir have been jailed in an open-air prison, devoid of any mobility and communication,” Zubair Ahmad, a Kashmiri student studying in New Delhi, said.

“Ideally, here, people should have been talking about the grave human rights violations the whole population in the valley is facing rather than merely talking about detentions of a few political leaders.”__Al Jazeera