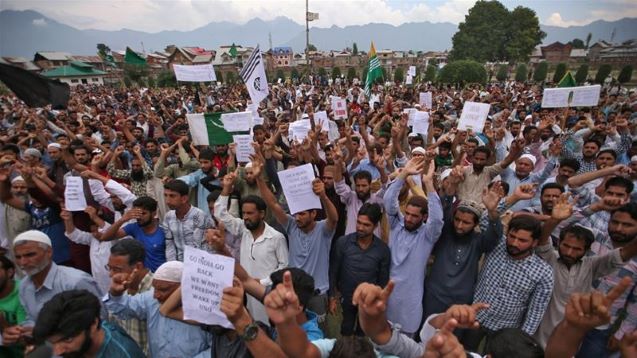 Authorities in Indian-administered Kashmir say they have restored landline telephone links and eased restrictions on movement in some parts of the region after a nearly two-week security lockdown and communications blackout.

In a Twitter post on Saturday, Shahid Choudhary, a government administrator in Srinagar, the region’s main city, said authorities have “initiated” the process of restoring phone lines.

Other restrictions imposed following the Indian government’s decision to strip the territory of its autonomy would be lifted “from most areas” on Sunday, he said, urging the public not to “rush for panic shopping”.

Dilbag Singh, police chief of the Jammu and Kashmir state, told AFP news agency that 17 out of approximately 100 telephone exchanges for landlines were restored in the mainly-Muslim Kashmir Valley.

Mobile internet has also been restored to five areas in the Hindu-dominated Jammu region, he added.

But roughly two dozen people who spoke to an AFP reporter in Srinagar on Saturday morning said their landlines were still dead.

The Hindu-nationalist government in New Delhi had imposed the crippling lockdown to avoid protests against its decision on August 5 to revoke special rights from Indian-administered Kashmir. The move has prompted anger in the region and raised tensions with neighbouring Pakistan.

Police in Jammu and Kashmir said on Saturday that restrictions on the movement of people were relaxed in several parts of the region, including the Kashmir Valley. “Situation remains peaceful,” they said on Twitter.

Al Jazeera’s Anchal Vohra, reporting from New Delhi, said the curbs were only eased in the Jammu region and many areas of the Kashmir Valley were still “reeling” under the impact of the lockdown.

“There is hope, however, that things will get easier over the weekend. Schools and government offices are set to reopen on Monday. The Indian government reiterates this will be a step-by-step approach,” she said, adding the lockdown has failed to stop protests in the region.

Several hundred protesters clashed with police in the city on Friday, according to witnesses. The police responded with tear gas and pellet-firing shotguns. People hurled stones and used shop hoardings and tin sheets as improvised shields, as police shot dozens of rounds into the crowd. No injuries were reported.

Meanwhile, there was a deadly exchange of gun and mortar fire between Indian and Pakistani forces on Saturday across the heavily-militarised Line of Control (LoC) dividing Pakistan-administered and Indian-administered Kashmir.

Both India and Pakistan claim the Himalayan region in its entirety, but rule it in part. The nuclear-armed neighbours fought two of their three wars over Kashmir.

Aman Anand, spokesman for the Indian army, said an Indian soldier was killed by Pakistani forces in the Nowshera sector.

Pakistan’s army said on Friday that a third Pakistani soldier had been killed in the exchanges of fire across the LoC. The death brought the Pakistani death toll to six since Thursday.

Asif Ghafoor, spokesman for Pakistan’s military, told reporters on Saturday that the country’s armed forces were fully prepared to respond to any Indian aggression over Kashmir.

“If Indian forces try any misadventure or aggression, then, with your support, the Pakistani army will give a befitting response,” he said.

While Pakistan has sought to internationalise the issue, India says the territorial dispute must be resolved bilaterally and calls the situation on its side of the border an internal affair.

Even so, the United Nations Security Council met behind closed doors at the request of China and Pakistan to formally discuss the issue for the first time in 54 years.

Khan welcomed the move saying that “ensuring resolution of the dispute is the responsibility of this world body”.

Shah Mahmood Qureshi, Pakistan’s foreign minister, told reporters on Saturday that the country was establishing a Kashmir desk in the ministry and also in foreign capitals to “lobby for Kashmiris and their right to self-determination”.

But Syed Akbaruddin, India’s UN ambassador, told journalists after the UN meeting that Kashmir was an “internal matter” for India and that it was “gradually removing all restrictions” that were recently placed on the region as it “moves towards normalcy”.

Zhang Jun, China’s UN ambassador, told reporters that council members had been “seriously concerned” by the Kashmir crisis and that neither India nor Pakistan should provoke a situation that was “already very tense and very dangerous”.

Those countries should “discard the zero-sum game mentality” to the region, he added.

Relations between India and Pakistan remain tense despite calls from the international community to resolve the issue peacefully.

UN Secretary-General Antonio Guterres has urged Pakistan and India to refrain from any steps that could destabilise Indian-administered Kashmir, while also expressing concern about reports of restrictions by the Indian government.__Al Jazeera