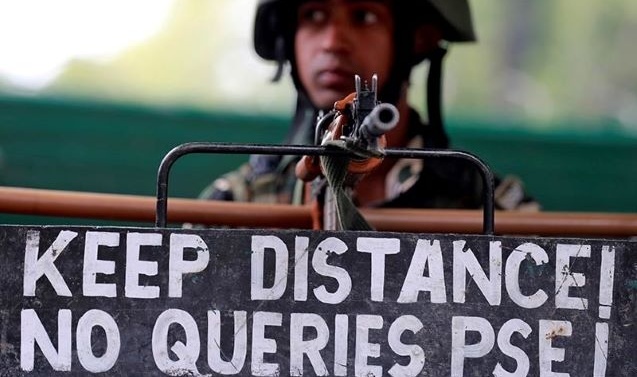 India will lift restrictions on people’s movements and communication links in occupied Kashmir in the next few days, the central government told the Supreme Court on Friday.

The court was hearing a petition by a newspaper editor seeking restoration of telephone and internet services snapped this month, just before the government withdrew occupied Kashmir’s special status, to prevent protests.

The restrictions would be lifted in the “next few days”, said the government lawyer, Tushar Mehta.

The court gave no immediate ruling after hearing the petitions, which have been filed by advocate M.L. Sharma and by Kashmir Times editor Anuradha Bhasin.

Vrinda Grover, the attorney for Bhasin, said the government assured the court that the ground situation in occupied Kashmir was being reviewed daily, adding that the judges decided to give the government more time.

A heavy troops presence and restrictions including a near-constant curfew and news blackout were in place for a 12th day on Friday in the portion of Kashmir that India occupies. It imposed the lockdown to avoid a violent reaction to New Delhi’s decision to downgrade Kashmir’s autonomy on Aug 5.

Some analysts have said the revoked status was illegal because it was done without Kashmiri representation.

Meanwhile, the family of a Kashmiri journalist working with a regional English daily says he has been detained by Indian armed forces.

Irfan Amin Malik is 26 and works for Greater Kashmir, one of the largest circulating newspapers in the region.

Malik’s father Mohammed Amin Malik told The Associated Press that Malik was taken into custody late Wednesday night at his house in Tral in Pulwama, a southern district in occupied Kashmir. “We are worried about our son,” he said.

According to AP, Malik’s is the first detention of a journalist in the region since India decided to revoke Kashmir’s special constitutional status on Aug 5.__Dawn.com