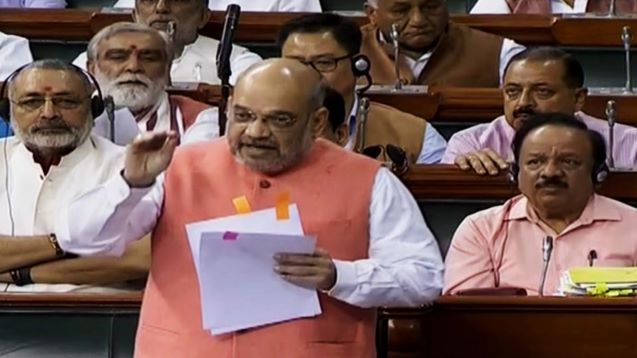 Under Article 370, laws by Parliament do not automatically apply to Jammu and Kashmir, according to conditions under which it acceded to India, something governed by the so-called Instrument of Accession.

The Lok Sabha on Tuesday has vetted the government’s move to immediately scrap Article 370, a historical provision that had extended a special status to Jammu and Kashmir for nearly seven decades, and carve two union territories out of the Himalayan state. The two changes that would bring the state under the direct control of the Centre, the government insists, would help curb terrorism backed by Pakistan and fast track development.

The resolution to end special status for Jammu and Kashmir and the bill to split J&K into two centrally-administered territories were passed by more than 351 votes in favour of the motion, 72 against. Shah withdrew a third bill to extend 10 per cent quota in jobs and education for the poor to people in Kashmir, pointing that this reservation would now extend to the people in J&K automatically.

Home Minister Amit Shah who led the government’s move in Parliament, described Article 370 as a provision that had created a barrier between Kashmir and the rest of the country. “This is why everyone keeps on repeating that Kashmir is an integral part of India… Why don’t we say that for Tamil Nadu or Uttar Pradesh…. Because Article 370 created suspicions,” said Shah.

Once this law and resolution on Article 370 are passed, this hurdle would disappear, Shah said in his response to a day-long debate in the Lok Sabha on the two provisions.

That the proposals would be passed by the Lok Sabha was never in doubt. The BJP-led ruling coalition NDA has an overwhelming majority in the lower house. In the Rajya Sabha where it is still short of majority, the bill was passed by a two-third majority.

In a blog, former Finance Minister Arun Jaitley has suggested the public mood in favour of Prime Minister Narendra Modi’s Kashmir policy had compelled many opposition parties to support the bill.

Shah elaborated this point in Lok Sabha, stressing that expect for a handful of lawmakers, most opposition leaders who demanded continuation of Article 370 did not spell out even one benefit that would accrue on account of this provision.

Under Article 370, laws by Parliament do not automatically apply to Jammu and Kashmir, according to conditions under which it acceded to India, something governed by the so-called Instrument of Accession.

Shah said the only purpose that Article 370 served was to keep out 106 laws enacted by Parliament for the benefit of people. Laws such as the one that empowers agencies to investigate corruption, guarantee right to education to children, the one that bans marriage of children or requires the government to take steps for the disabled.

Turning to the people of Kashmir, the Home Minister asserted that the government firmly shut the doors on the possibility of talks with the separatist Hurriyat Conference. “But people of the valley are our own. We will embrace them and keep them with love. If they have any doubts about this, we are ready to discuss with them,” Amit Shah said.

The home minister also promised that the government was open to revisiting the union territory status for Jammu and Kashmir and restore statehood once normalcy returns. To a demand by a opposition member by Amit Shah spell out a timeline, the home minister reminded the House that former Prime Minister Jawaharlal Nehru had promised that Article 370 was being added as a temporary measure. It has taken 70 years to remove this provision, Shah said, adding that the NDA surely did not have that kind of a time frame in mind.__Hindustan Times