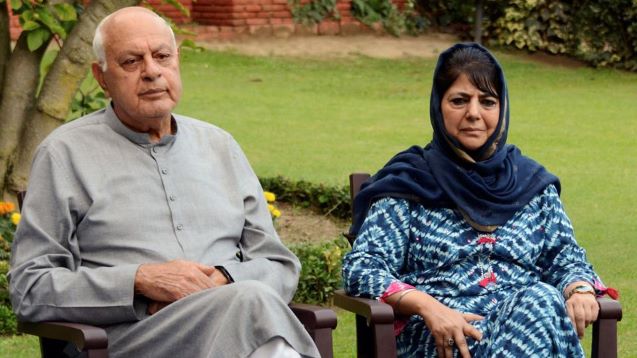 SRINAGAR: The leaders of mainstream political parties in Jammu and Kashmir, who met in Srinagar on Sunday evening, decided to seek an audience with President Ram Nath Kovind, Prime Minister Narendra Modi, and leaders of other parties amid tension in the state over fears of scrapping of Articles 35A, 370. The parties resolved to protect and defend the special status of Jammu and Kashmir.

“It was unanimously resolved that all the parties would be united in their resolve to protect and defend identity, autonomy and special status of Jammu, Kashmir and Ladakh against all attacks and onslaughts whatsoever; modification abrogation of Articles 35A, 370, unconstitutional delimitation, trifurcation of the state would be an aggression against the people of Jammu and Kashmir and Ladakh,’’ said Farooq Abdullah while reading the resolution passed after the all-party meeting.

The former chief minister also made an appeal to India and Pakistan that they should never take any step which will create tension between the two countries.

Senior Abdullah said that even during the worst times in 1990 and 2000, the Amarnath yatra was never disbanded and there wasn’t forced removal of tourists from the Valley.

“The parties participating in the meeting resolved to seek audience with the President and Prime Minister of India and also with the other leaders of the political parties to apprise them of the current situation and make an appeal to them to safeguard legitimate interest of people of the state with regard to the constitutional guarantees that had been given to the state by the constitution of our country. They (leaders) will also apprise them of the unwholesome consequences about short and long term bound to follow the unconstitutional violations of these guarantees,’’ the resolution said.

Abdullah said the representatives of the political parties resolved to remain together and also urged the people to be patient.

“I appeal to the people of the state of Jammu, Kashmir and Ladakh to keep peace and be patient; they should never take any steps which will cause disturbance here.”

Earlier in the day, Mehbooba Mufti said that the political parties had decided to hold a meeting at a hotel but the hotels have been asked by police not to host any political function.

“We tried to hold the meeting in a hotel but there is a police advisory to all hotels not to allow political meetings,” said Mufti.__Hindustan Times