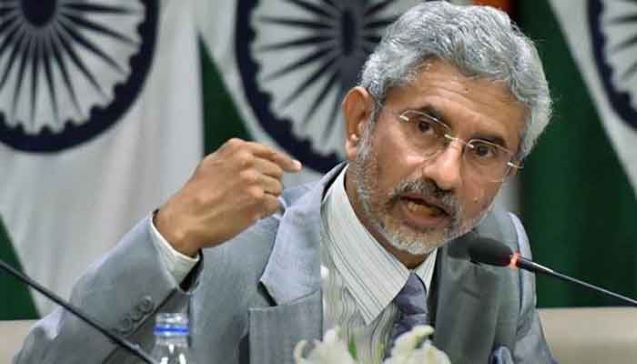 BANGKOK: Following US President Donald’s Trump’s Kashmir mediation offer for the second time on Thursday, Indian Foreign Minister S. Jaishankar Friday said he had conveyed to the US in clear terms that any talks to resolve the Kashmir dispute could only be held between India and Pakistan, and that he will not invite third-party mediation.

Speaking on the mediation offer in response to a question from a reporter at the White House, Trump said, “It is really up to PM Modi. I met with Prime Minister Khan, I got along great. I think they are fantastic people, both Khan and Modi. I would imagine they can get along very well.”

He added, “If they wanted somebody to intervene (on Kashmir issue) or to help them… and I spoke with Pakistan about that, and I spoke, frankly, to India about it. But that’s been going on, that battle, for a long time.”

“Have they accepted the offer or not,” Trump sought a clarification when asked about India’s rejection of his mediation offer. When asked how he would “want to resolve the Kashmir issue”, Trump said, “If I can, if they wanted me to, I would certainly intervene.”

Jaishankar met with US Secretary of State Mike Pompeo on the sidelines of the Association of Southeast Asian Nations (Asean) Regional Forum, East Asia Summit and other meetings here, reports the Indian media.

“Have conveyed to American counterpart @SecPompeo this morning in clear terms that any discussion on Kashmir, if at all warranted, will only be withPakistan and only bilaterally,” Jaishankar said in a post on Twitter on the second meeting between the two.

“Wide ranging discussions with @SecPompeo on regional issues,” Jaishankar said in another post, along with a picture of the two shaking hands in Bangkok. Jaishankar’s comments follow President Trump’s last month statement that Prime Minister Narendra Modi had sought his mediation on the Kashmir dispute with Pakistan — something the Indian foreign ministry and the US state department later denied.

A US State Department statement Friday said: “The two discussed our shared commitment to upholding the rule of law, freedom of navigation, and democratic values in the Indo-Pacific region. The secretary reaffirmed the positive trajectory of the US-India strategic partnership.”

Soon after Trump’s earlier offer in the presence of Pakistan Prime Minister Imran Khan, Jaishankar had said Modi had not made any such request to Trump. The US State Department, too, had issued a clarification stating the Kashmir dispute was a “bilateral” issue between India and Pakistan, and the US “welcomes” the two countries “sitting down” for talks.

Later that week, Indian foreign ministry spokesman Raveesh Kumar said New Delhi wanted to “move on” from the controversy. Meanwhile, Foreign Minister Shah Mahmood Qureshi Friday urged the United States to use its influence to persuade India to come to the table for a peaceful resolution of the Kashmir dispute.

Responding to US President Donald Trump’s fresh offer to mediate Kashmir between Pakistan and India, Qureshi said India did not appear willing to negotiate on the matter.

“India is involved in a bloodbath [in occupied Kashmir]. India insists it is a bilateral matter, but it is not even willing to come to the table for talks,” the foreign minister told a news channel. “Trump offered mediation keeping in view the regional situation. We thank [him] for the offer, and we have expressed our willingness,” Qureshi said.

“We want peace. Our focus right now is the Afghan peace process. If India [tries to] create any obstacle to the peace process in Afghanistan, then regional peace will suffer. “India won’t agree easily to the Kashmir talks. [We urge] the US to exercise its influence and persuade India [to come to the table],” the foreign minister said, adding that he was writing a letter to the United Nations secretary general in this regard.__The News