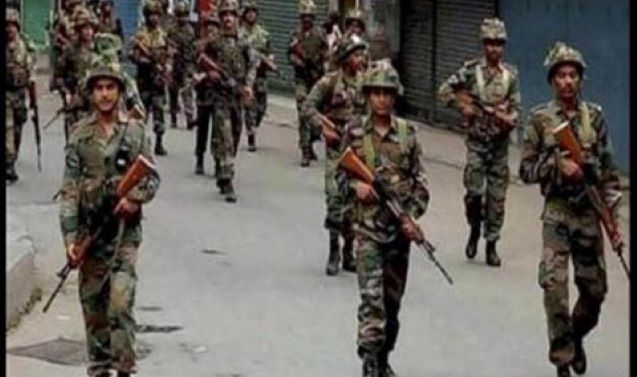 While the move has triggered fresh fears among people in the Valley about scrapping of Article 35A, the police authorities termed the MHA order a “routine exercise.”

The additional forces readied for the deployment include 50 companies of CRPF, 30 companies of SeemaSahsatraBal and 10 companies each of Border Security Forces and Indo Tibetan Border Police.

Interestingly, 9 companies of CRPF personnel on Parliament duty and KanwariyaYatra in New Delhi would be part of this fresh deployment to the State, which is presently under direct rule of the Centre.

A senior official said “additional forces” have been moved in when there are already 197 additional companies of paramilitary forces stationed the Valley.

“These companies were sent for holding civic elections and Amaranth Yatra,” the official said

The deployment was ordered on the day when National Security Advisor AjitDoval returned to New Delhi after holding discussions with Governor Satya Pal Malik, his Advisors and top brass of J&K police and intelligence agencies, during his three-day stay in Kashmir.

In another development, Senior Superintendent of Police (Armed), Police Control Room Jammu on Saturday asked all commandants of J&K Armed Police/India Reserve Police battalions and Principals of Police Training Schools of Jammu province to communicate about shortfall of riot-control weapons.

“You are requested to communicate the shortfall of riot- control equipments/gas gun, TSMs etc (if any) to this (office)… for onward submission to higher–ups,” reads the message sent by the SSP.

According to the communiqué, described as “urgent”, 100 companies have been formed for special duties by mixing the manpower of units and training centers.

But, with each passing hour, the anxiety was deepening in Kashmir, with mainstream politicians also fearing about scrapping of the constitutional provisions granting special status to J&K.

“The matter is sub-judice, therefore it (Supreme Court) should be kept aloof from politicking. I would appeal (to the) government of India to refrain from commenting on the issue till the final verdict comes,” Omar Abdullah had said on Thursday.

Quoting sources, the wire agency IANS said the countdown for removal of the Article 35A has started. “An elaborate contingency plan has been worked out to take care of even the minutest details. How the law and order situation would behave; the response of over-ground and underground separatist cadre and also the response of the mainstream political leadership,” it said. “The orders seem to be clear, violence and attempts to disrupt peace by anti-national elements, in the garb of a public outcry to oppose the abrogation of Article 35A.”

“The entire operation to deal with the law and order fallout in the aftermath of the abrogation of Article 35A has even been code-named,” the sources said.

Special flights carrying CAPFs have landed at the Srinagar airport during the last three days, while convoys carrying additional companies of these forces are reaching the Valley through Jammu-Srinagar National Highway.