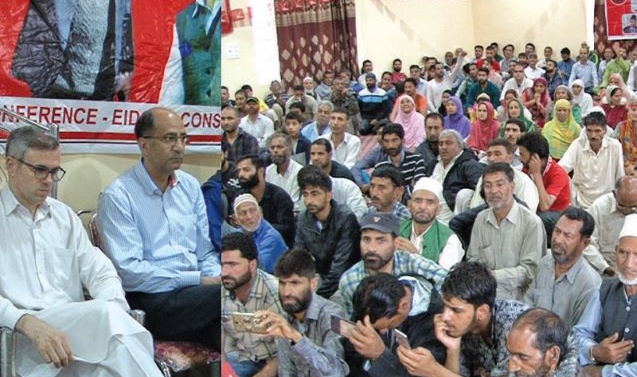 ‘Kashmir gripped with anxiety in wake of unwarranted, intimidatory threats ‘
National Conference vice- president Omar Abdullah on Thursday said the Government of India should repose its faith in the Apex court of the country and refrain from bullying the J&K people with the unwarranted and intimidatory threats on annihilating the Articles 35-A and 370.

Omar while addressing a workers convention in Eidgah constituency here said that the untenable advisories emanating from the administration have created fear psychosis in the state in particular the Kashmir region. “People in the Valley are going through anxiety in wake of the rumor mongering set afloat by the administration. Whosoever goes to government offices is being warned to stock necessary household items and other edibles before 15 August. Here what is worrisome is that the rumors are being set afloat by the people in administration itself. The rumor mongering has created panicky and fear psychosis among the people,” he said adding, “People are being told to stock ration, fill their automobiles, and switch to land lines. The news that the police stations have been told to acquire bulldozers is also keeping the rumor mill churning. People have become anxious. What is it that the present government wants to achieve by spreading such rumors?”

The NC vice-president said that on one hand the GOI and the state administration are boasting off the improvement in the situation in the state following a steep decline in the militant attacks and stone pelting in the Valley. “But on the other hand undue rumors are being spread by the administration itself that the state will once again be on fire after 15 August. What is it the Government of India and the state wants to achieve by bullying people? It is not New Delhi that suffers whenever situation is difficult in the state. It is the people of Kashmir that bear the direct brunt of tumultuous situation. The statements emanating from Union ministers, hinting towards the abrogation of Art 35-A after the 15 August, have also kept the rumor mills churning. The people are becoming restive.”

Omar said the petitions pertaining to Articles 35-A and 370 are sub-judice and that the GOI should wait for the final verdict. “Do they not believe in the final decree of the Supreme Court of India. Contrary to the disdain the incumbent central government has for the rule of law and the procedures established by the law of country, our party has reposed its faith in the Supreme Court. The matter is sub judice therefore it should be kept aloof from politicking. I would appeal GOI to refrain from commenting on the issue unless the final verdict comes,” he said.

Omar was very vocal in his attack on the forces attacking the integrity of the state. “Today we are hearing that the state will be trifurcated. However let me make it very clear that any misadventure in this direction will set the state on fire. Any anticipated trifurcation of the state won’t limit itself to regions. Any whimsical attempt to trifurcate the state will eventually divide the state on religious lines. In those circumstances the state will be divided on Hindu, Muslim and Buddhist lines,” he said adding, “What is it that the New Delhi wants to suggest by proposing such far-fetched ideas. What do they want to suggest? Do they want to assert that the people’s decision of joining the union of India was wrong? Do they want to suggest that the “two nation theory” is right? Do they mean the struggle of Sher- e- Kashmir against two nation theory was wrong? Do they mean that the Slogan of Sher-e- Kashmir on Hindu-Muslim unity was erroneous? If yes let them come forward and make it public. As far as our party is concerned we reject any idea of diving the state on religious and regional lines, our vision of Jammu and Kashmir is shorn of communal, regional overtones. We stand for a united state, with equitable justice for all the sections of society living across the state. We will safe guard the prized diversity of our state come what may.”

The NC vice-president while exuding confidence into the workers said, “For past four days NC general secretary is touring the Chenab and addressing various worker’s conventions there. The enthusiasm of the people towards NC is awe-inspiring and encouraging. Never before have people shown such fondness for NC as they are doing it now. In Inderwal, it was for the first time after 2015 that we held a workers convention. The convention saw a massive participation of people from across the constituency. Likewise in Doda, Kishtawar and other areas of Chenab valley there is a wave in favor of National Conference. People living in the arduous areas of Chenab valley and Pir Panchal areas are all out for National Conference. The rows of the party rank and file are increasing day by day; the workers have high energy level to take on to any challenge facing the state. The people living in those areas are exhibiting that they are equally passionate about the identity of the state.”

Rejecting the intemperate rants of the Governor against politicians regarding corruption he said, “Let him come up with a penny of evidence in this matter against us. I am convinced that he won’t be able to come up with anything against us. Our conscience is clear, we are not afraid of anything; let the governor come up with any irregularities, if any. We never went to Delhi to seek any thing for us. We always went to Delhi to seek help for our people. We didn’t barter our values. Let them constitute a commission.”

Referring to the jibes from certain quarters that only 10% people voted for party president Dr Farooq Abdullah the vice-president said, “It is not Dr Farooq who is to be blamed for this. It is the administration itself who failed to create an atmosphere in the Kashmir where in people could have voted in large numbers. If they say that only 10% voted in the parliament elections than they should ascertain as to why 90% refrained from voting. The need of the hour requires the New Delhi to hold parleys with those who didn’t came out to vote. The powers sitting in New Delhi are also reluctant to talk to those who have different views other than that ours. But New Delhi does not want to have parleys with anybody here in Kashmir. They are only interested in those few who have been trying their level best to become leaders. The powers in New Delhi are interested in those few who take money from them. New Delhi is interested only in those whose sole agenda is to add colors to the nefarious designs of such forces as want to obliterate the identity of the state.”

In his address party’s provincial president Nasir Aslam Wani while expressing concern over the development deficit in Srinagar city said, “Nothing substantial was done to meet the development demands of the people of Srinagar. The tall claims of the PDP-BJP government since 2015 on addressing the drainage problems in Srinagar city, flood mitigation plan, smart city, ring road, the protection of cultural heritage of Shahar e Khas, free housing turned out to be a damp squib. In our times we mulled to increase the spawn of Srinagar city, to meet to the rising demands of housing, but they didn’t work in that direction. That is precisely why NC won with a big lead in Parliament elections in all the eight constituencies of Srinagar parliamentary constituency.” Party’s senior leader and former Speaker Mubarak Gul said the consequences of election boycott in the ensuing assembly elections will have far reaching consequences on the identity and integrity of the state.