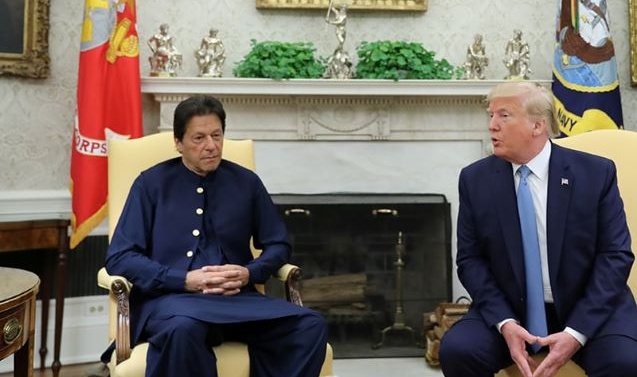 US President Donald Trump has offered to help resolve the Kashmir issue between India and Pakistan in initial remarks with visiting Prime Minister Imran Khan.

“If I can help, I would love to be a mediator,” Trump said on Monday at a joint appearance in the White House with Khan following up on the Pakistani Prime Minister’s request that he would like the United States to mediate to resolve the Kashmir dispute.

Trump also said that when he met Prime Minister Narendra Modi recently in Osaka on the sidelines of the G-20 summit, the latter had asked him if he would like to mediate on Kashmir.

While there was no immediate reaction from the ministry of external affairs on Trump’s remarks on mediation on Kashmir, former Jammu and Kashmir chief minister and National Conference leader Omar Abdullah was quick off the block to ask if there has been an undeclared shift India’s position on Kashmir.

“Is Govt of India going to call @realDonaldTrump a liar or has there been an undeclared shift in India’s position on third party involvement in #Kashmir?” he tweeted.

Trump and Khan were to hold delegation-level meetings after the opening remarks, during which Afghanistan and counter-terrorism would be the chief topics of discussion.

The US President also said Pakistan was helping the United States “a lot” in Afghanistan, which is the focus of his meeting with Khan.

“Pakistan’s going to help us out to extricate ourselves,” the US president said. “We’re like policemen. We’re not fighting a war. If we wanted to fight a war in Afghanistan and win it, I could win that war in a week. I just don’t want to kill 10 million people. … I have plans on Afghanistan where if I wanted to win that war, Afghanistan would be wiped off the face of the earth,” Trump said.

He also spoke of the suspension of the security aid for Pakistan, which he ordered in 2018 over Islamabad’s patchy counter-terrorism measures, and said relations were better between the two countries because of that.

“We paid $1.3 billion to Pakistan in aid for many years,” Trump said, “The problem was Pakistan wasn’t doing anything for us. … I ended that a year and a half ago… To be honest, I think we have a better relationship with Pakistan right now than when we were paying that money. That money can come back.”

In a fact-sheet on the visit, the White House said, “Pakistan has taken some steps against terrorist groups operating within Pakistan. It is vital that Pakistan take action to shut down all groups once and for all.”

Khan said in response to a question from reporters that there was no military solution to Afghanistan and he hopes the Taliban will talk to the Afghanistan government to bring peace to the country. Trump said he agreed with the Prime Minister.__Hindustan Times