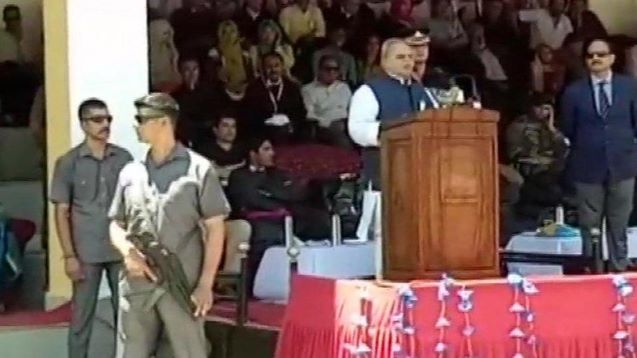 SRINAGAR: Jammu and Kashmir governor Satya Pal Malik on Sunday raised eyebrows when he asked militants, whom he said were just 250 in number now, to kill those who have robbed the wealth of Kashmir rather than police guards.

“…These boys with gun are killing their own people for no reason. They kill PSOs (personal security officers), SPOs (special police officers). Why are you killing them? Kill those who robbed your country; those who robbed the whole wealth of Kashmir. Have you ever killed anyone of those?” Malik said while speaking at the inauguration of the Kargil and Ladakh tourism festival at Khree Sultan Cho Sports Stadium Kargil.

Malik said that the militants are losing their lives for no reason.

“Nothing will come out of this. Nothing will be achieved by gun wielding because nobody can bend a government with a gun in India. In Sri Lanka, an organisation like the LTTE, a powerful terrorist organisation in the world, was just finished. You take everything by dialogue,” he said.

Without identifying anyone, Malik accused politicians of double speak. “These netas who spread fear in Delhi, provoke them here. I told them to talk in one voice,” he said.

Malik said that there were just 250 militants, whom he referred to as ‘kids’, in the state with half of them from Pakistan.

“Just around 250 of these kids have remained. 100-125 are from Pakistan. In an encounter they take two days to die while these (who are local) take two hours because they have neither training nor good weapons,” he said.

The governor said that they should work on the development of Kashmir rather than dying for no reason.

“Now they are neither told about azadi nor autonomy but they are told by maulvis that you will get paradise. I am telling you about two paradises while living: One is Kashmir; develop it and another, while living a good Muslim life, hereafter. Why are you dying uselessly,” he said.

Malik said that the atmosphere in the valley was improving. “For the first time in 30 years the Hurriyat has given no bandh call on the visit of the home minister. When I talked about bringing back Brahmins of Kashmir, the Hurriyat chief also said that he holds the same opinion and that they should return.”

Meanwhile, National Conference leader Omar Abdullah reacting to Governor Malik’s statements said, “This man, ostensibly a responsible man occupying a constitutional position, tells militants to kill politicians perceived to be corrupt. Perhaps the man should find out about his own reputation in Delhi these days before sanctioning unlawful killings and kangaroo courts.”__Hindustan Times