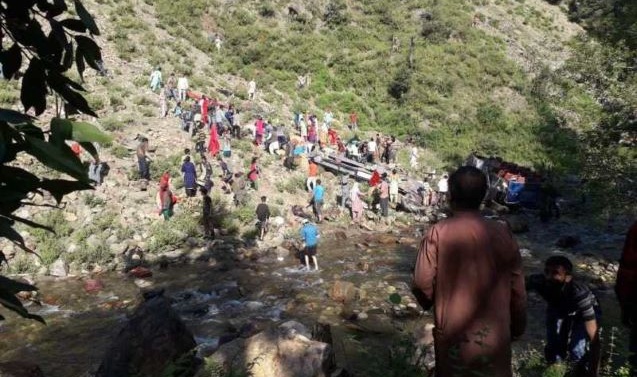 SRINAGAR: In a tragic accident, 35 persons were killed and 17 others injured, when a Matador (Mini bus), they were travelling in skidded off the road and fell into a deep gorge at Thakrie area of Keshwan in Kishtwar district of Jammu and Kashmir on Monday.

According to reports, a mini bus with the capacity of 25 passengers bearing registration number JK17-6787 was carrying 52 passengers was its way from Keshwan to Kishtwar, when driver lost control on the steering while negotiating a sharp curve and vehicle skidded off the road and rolled down about 250 feet and fell into a nallah at Sirgwari(Thakrie) near Kuryal Pul, about 23 KM from Kishtwar town.

After receiving information about the mishap, Police, SDRF, Volunteers of Ababeel and Red Cross society along with locals rushed to the spot and started a rescue operation. Later, Army also joined the rescue operation.

All passengers were shifted to District Hospital Kishtwar, where doctors declared 23 as brought dead while 12 more succumbed to their injuries, taking toll to 35 as the last reports came in.

An official said that 52 passengers were on board when the mishap took place. Three critically injured were airlifted to GMC Jammu for further treatment.

Meanwhile, on the call of Traders union Kishtwar, all schools and business establishments in Kishtwar closed as a mark of condolence and against overloading.

When contacted, DDC Kishtwar Angrez Singh Rana said, “I’m on the spot to supervise the rescue operation, the road stretch where fatal accident took place is completely okay. According to preliminary investigation, It seems to be the negligence of driver and perhaps due to overcrowded passengers resulted in the accident.”

“We have already airlifted 3 seriously injured to GMC Jammu in Pavan Hans chopper, now we are waiting for the army helicopter to shift 7 other injured to GMC,” officer added.__GK News