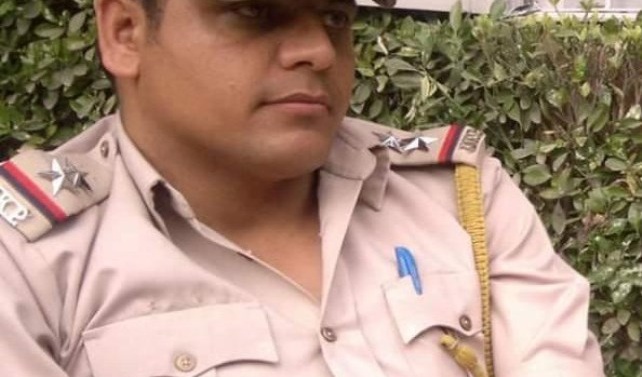 Station House Officer, Anantnag, who was wounded in a militant attack in this south Kashmir district on June 12, succumbed at AIIMS, New Delhi, on Sunday.

The attack was carried out by the militants on a CRPF patrol party near Oxford presentation school on the busy KP Road in Anantnag town on Wednesday evening.

Khan who was rushed to a military hospital in a serious condition after he had received bullet injury in the abdomen, was shifted to SKIMS Soura today after his condition deteriorated.

“He had laceration in the liver and was shifted to ICU after his condition kept on deteriorating. In the afternoon, he was airlifted to AIIMS,” a doctor at SKIMS told Greater Kashmir.

A police officer said, Khan, succumbed to his injuries just when he reached the AIIMS New Delhi, at around 4 pm.

He said his body is being flown back for last rites.

Khan who hails from Srinagar’s uptown area had taken over the charge in Anantnag barely a few weeks back. He was earlier posted as SHO Bijbehara.

Born to Mushtaq Ahmad Khan and Mehbooba Begum in Balgarden Srinagar, Khan was appointed as Sub-Inspector in J&K police in 2002 and served in various important capacities.

He is survived by parents, wife, two sons aged 2 and 5 years.

A source had revealed, as the lone militant attacked the CRPF party, the reinforcement of army, paramilitary forces and police were called in.

“As the exchange of fire was on, the police party led by SHO SaddarAnantnag rushed to the spot, but he (the militant) fired at him (SHO), injuring him critically. The militant kept on engaging the security forces for around fifteen minutes before he was gunned down,” a police officer had said.

The Anantnag attack was the first major attack on the security forces since February 14 Lethpora- Pampore attack in which at least 40 CRPF men had been killed resulting in heightened tensions between India and Pakistan.

Meanwhile, Governor Satya Pal Malik and Director General of Police Dilbag Singh have expressed grief over the demise of the SHO Arshad Khan.

In his message, the Governor paid rich tributes to the deceased and described his demise a big loss to the police department.

Mentioning that SHO Khan’s bravery saved many lives, the Governor stated: “We are all grateful to such brave hearts who are sacrificing their lives for security of the nation”.

Meanwhile, Director General of Police (DGP) Dilbag Singh on behalf of Jammu and Kashmir Police Pariwar condoled the demise of Inspector Khan and expressed his grief over the loss of young and brave officer. He conveyed his heartfelt condolence to the bereaved family and prayed for the departed soul.

The DGP has said that whole Jammu and Kashmir Police pariwar is with the bereaved family at this hour and will always be at the beck and call of the family.__GK News