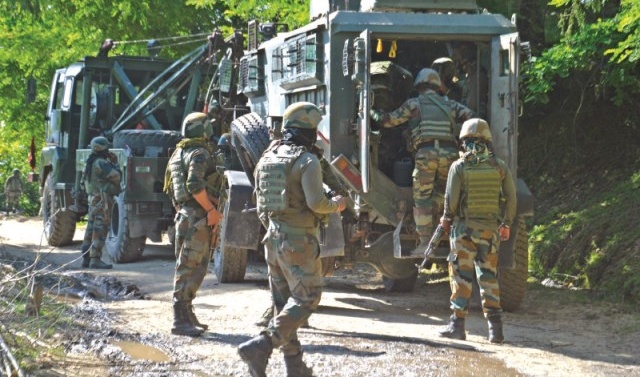 SRINAGAR: Two Jaish-e-Muhammad militants were killed in a gunfight with the security forces in this south Kashmir district on Tuesday.

A police official said a joint party of the security forces comprising of Army’s 19 RR, Central Reserve Police Force and Special Operations Goup (SOG) of Jammu and Kashmir police cordoned off the forest area of Kharpora and Kachwan in Larnoo area of Kokernag this afternoon and launched searches. “The militants present there opened fire on the search party. The fire was retaliated triggering a gunfight in which two militants were killed,” the official added.

He identified one of the slain militants as Faisal Nazeer, 22, a B Tech graduate originally hailing from AakhuraMattan and presently residing at NaibastiAnantnag. The deceased militant, according to the source, had joined the JeM outfit nearly 45-days ago.

The official said that another slain militant is a Pakistani national. “As the firing stopped, the bodies of both the militants were retrieved and the operation was called off,” he said adding two weapons and other incriminating material was also recovered from the gun battle site.

A source said that when the gun battle was on the security forces used choppers to trace the hiding militants.

Pertinently, in the early morning hours, massive searches were launched by the security forces in Kehripora- SoafShali and Hangalgund villages of Kokernag, but the operation was called off after nothing was found there.

As the word about the killing of two militants spread in south Kashmir youth came out on streets and pelted security forces with stones at Khanabal, Naibasti, Lalchowk and some other areas of old town. Protests and clashes also broke in several villages of Kokernag.

Meanwhile, the 2G internet service which was resumed in the district after four days was suspended again following the encounter.__GK News