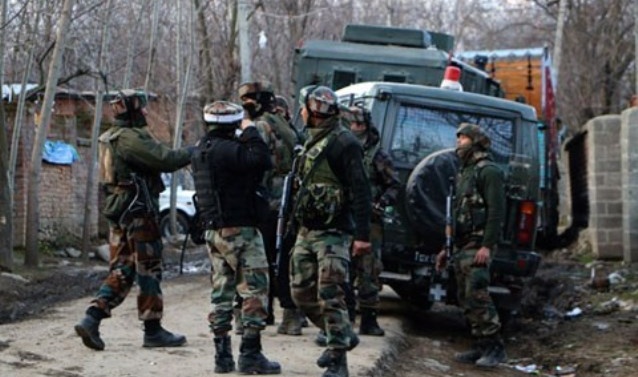 SRINAGAR: Three militants, an army man and a civilian were killed in a fierce gunfight that broke out in Dalipora area of Pulwama town in south Kashmir on Thursday morning.

An official said that the gunfight broke out shortly before dawn after the security forces launched a cordon and search operation in Dalipora following inputs about the presence of militants.

He said the militants opened fire after the forces approached the house where they were hiding. “The forces retaliated, triggering a fierce gunfight,” he said, adding that three militants and a soldier were killed in the firefight that raged for several hours.

Reports said a civilian, believed to be the son of the house owner, was also killed and his brother wounded during the gunfight.

The deceased civilian was identified as Rayees Ahmad Dar and his injured brother as Younis Ahmad.

A police official said that the bodies of the slain militants have been recovered from the gunfight site.

A top commmander of the Jaish-e-Muhammad was among the three militants slain in a gunfight with the security forces in southern Pulwama district, officials said.

As the Police & security forces were evacuating civilians from the neighbourhood area around the target house, the hiding militants fired indiscriminately, he said.

“In the process one Army Jawan Sepoy Sandeep attained martyrdom and one civilian Rayees Dar also lost his life,” said the spokesman.

After the security forces retaliated, three militants were killed in the ensuing encounter and their bodies were retrieved from the site of encounter.

They were identified as Naseer Pandith of Kareemabad Pulwama, Umar Mir of Shopian and from the incriminating material recovered from the site of encounter, one militant has been identified as a Pakistani namely Khalid.

According to the police records, the slain were affiliated with proscribed outfit JeM. “They were wanted by law for their complicity in a series of crimes including attack on security establishments and civilian atrocities,” he said.

As per police records, Naseer Pandith was involved in the killing of a policeman Mohammad Yaqoob Shah of Pulwama in 2018 on the eve of Eid. He was also involved in some weapon snatching incidents reported from the area besides several cases were registered against him for his criminal activities including case FIR No 30/15 & 277/14 under NDPS Act and case FIR No 25/16 pertaining to forgery, said the spokesman.

Similarly, Khalid who was operating as commander of JeM was involved in several attacks on security establishments and civilian atrocities in the area, he said.

Incriminating materials including arms & ammunition was recovered from the site of encounter. All these materials have been taken in the case records for further investigation and to probe their complicity in other cases.__GK News