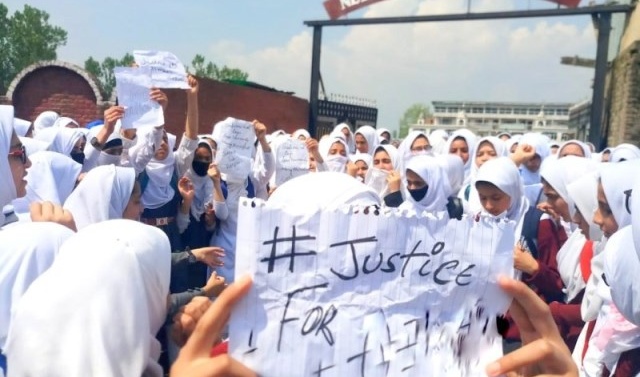 SRINAGAR: Reports of protesters clashing with the security forces have also been received from various parts of the valley.

Protests were held across the Kashmir valley on Monday against the alleged rape of a three-year-old girl in Sumbal area of north Kashmir’s Bandipora district last week.

At several places, the police used tear gas to disperse the protesters who had blocked the traffic movement to demand speedy trial of the case.

On the evening of 8 May, a 3-year-old girl was raped allegedly by his neighbour after luring her to a nearby school. “The accused had raped her in the washroom of the school located at a walking distance from their respective houses,” locals said.

Angered by the horrific incident, the protesters assembled on the Srinagar-Muzaffarabad highway at Hygam and blocked the traffic movement for several hours.

Police have detained the school principal for questioning.

The students of degree college Sopore and higher secondary school held a peaceful protest at Iqbal market area of the Sopore town amid a shutdown.

Schools and other business establishments have also been closed in the city while the movement of public transport has been affected.

Reports of protesters clashing with the security forces have also been received from various parts of the valley.

Meanwhile, police have constituted a special investigation team to investigate the alleged rape case. The accused has been arrested.

He said the police “are treating the accused as major” and the certificate that was uploaded on the social media regarding the age of the accused was “fake”.

He appealed to the people to not pay heed to any rumours and have “faith in the police”.

A police official said the age of the accused will be determined on the basis of “medical test” to be conducted by a team of senior doctors.__GK News