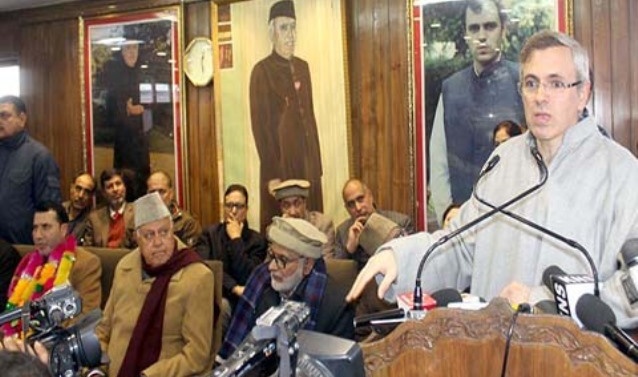 SRINAGAR: National Conference leader Omar Abdullah Monday said his party will strive hard for restoring the autonomy of Jammu and Kashmir that could include having a ‘Sadar-e-Riyasat’ (President) and ‘Wazir-e-Azam’ (Prime Minister), a statement which evoked sharp condemnation from Prime Minister Narendra Modi.

Addressing a rally at Bandipore in North Kashmir, Omar, a former chief Minister, said his party will not allow any attacks on J and K’s special status and will work to get back what was “infringed upon” including the coveted posts of Sadr-e-Riyasat’ (president) and prime minister for the state.

Modi condemned Omar’s remark and demanded to know from the Congress and the ‘grand opposition alliance’ parties if they supported the NC leader on the autonomy issue.

Addressing a rally in Secunderabad in Telangana, Modi asked the ‘Mahagathbandhan’ leaders to make their stand clear on the issue.

Modi said there were media reports that Omar has stated there should be a separate prime minister for Kashmir.

“Two prime ministers for Hindustan? Do you agree with it? Congress has to answer and all the ‘Mahagathbandhan’ partners have to answer. What are the reasons and how dare he(Omar) say that”, he said.

“I want to ask Bengal Didi who shouts a lot, do you agree with it?. Answer the people U-turn (Chandrababu) Babu with whom Farooq Abdullah campaigned recently in Andhra Pradesh. Do you think Naidu should get votes?”

“Would you like to go with them (Mahagathbandhan) or break away from them?”, Modi asked.

At his rally, Omar said the accession of the state with the Union of India was accomplished in lieu of various Constitutional safeguards, which if tampered with, will raise serious questions on accession.

Omar said after 70 years, forces inimical to the state’s special status were trying to backtrack from the conditions. “The move will also initiate debate on the fundamentals of accession, there is no second thought about it. It takes two hands to clap,” he said.

“…we will fight any attempt that is aimed to fiddle with our state’s status. We won’t allow any more attack on our special status. On the contrary, we will strive to get back what was infringed upon. We will work towards getting back the coveted posts of Sadr-e-Riyasat’ and Prime Minister for our state,” he said.

Responding to Modi’s attack on him, an unfazed Omar tweeted that he did not need other parties to support his stand and said his party has always stood for the restoration of the original terms of accession. “So there is NOTHING new in this. You guys must be really desperate when the Hon PM makes this an election issue.”

Taking a swipe at the prime minister, he tweeted “most grateful to Hon PM Modi Sahib for taking my humble speech and giving it a nation platform. @JKNC_ has always stood for the original terms of accession and will continue to fight for those. For the record we don’t need other parties to endorse our position.”

He also advised the Congress and other opposition parties that if they want they can distance themselves from his speech at Bandipora”…Please don’t hesitate to distance yourselves from my speech of today. In fact call Modi ji’s bluff by doing exactly that.”

He said the National Conference always stood for the “restoration of the terms of accession which Maharaja Hari Singh negotiated for the state in 1947 and we have done so unashamedly.”

Taking a dig at the BJP media cell, he tweeted “I’m humbled by the attention PM Modi pays to my speeches and very grateful to the social media cell of the BJP for highlighting my speech today, especially by WhatsApp’ing it to journalists. Your reach is far greater than mine.”

The Governor and Chief Minister of Jammu and Kashmir, after joining the Union of India in 1947, were called as “Sadar-e-Riyasat” and “Wazir-e-Azam” until March 1965.

The National Conference has always advocated restoration of autonomy for the state and had passed a resolution for the same in July 2000 in the state assembly. It was, however, not agreed to by the then BJP-led NDA government at the Centre.

Rebuffing the statement of BJP president Amit Shah against Article 35-A, Omar also said no one knew about Article-35A until he raised it in the assembly.

“I inquired from the then chief minister about the efforts that were being made by the state government to defend it in the Supreme Court. Only then it came into the realm of debate. In 1947 certain assurances were given to us in the form of securing our identity and the assurances were for all times.

“Before Shah, Arun Jaitley also had made some uncouth remarks on Article 35-A. Let me put it across, that we won’t allow that to happen. Article 370 and Article 35-A are the articles of faith for us, he said. The two articles relate to special status for the state.__GK News