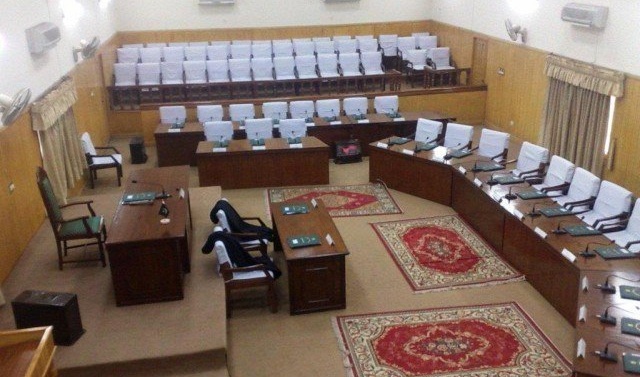 GILGIT: A forward bloc has emerged in the ruling Pakistan Muslim League-Nawaz (PML-N) in Gilgit-Baltistan as six of its lawmakers have gone against party policy, announcing observation of February 5 as ‘G-B rights day’ instead of Kashmir Day.

The announcement came days before Kashmir Day which is officially marked in Pakistan in solidarity with the people of Indian occupied Kashmir.

“Alongside our country’s decision making bodies, we also hold Kashmiri political leadership responsible for denying us our constitutional rights,” said the lawmakers during a press conference in Islamabad on Saturday.

The lawmakers denied being part of any conspiracy or being against the federal or regional government. “What we want is that the world must also remember G-B wherever sacrifices of Kashmiris are remembered because we are also part of the Kashmir issue as per the Supreme Court’s recent decision about G-B.”

Justifying their stance, the leaders remarked that G-B couldn’t attain its rights during the period the PML-N was in government at the Centre, therefore “we have decided to be part of a joint struggle for the attainment of our rights”.

While the lawmakers denied any rift, Chief Minister Hafeezur Rehman immediately issued a statement saying people in G-B would mark February 5 with zeal and fervour, and continue their moral support to the oppressed people. “We won’t let the enemy to divide us.”

A senior PML-N leader also confirmed the fissure within the party, saying the dissident group had refused to listen to senior party leaders’ advice against holding the press conference.

While rumours were doing rounds on social media about a forward group in the ruling party of G-B ever since Pakistan Tehreek-e-Insaf formed the government in Islamabad, it was the first press conference by the lawmakers who publicly went against the party policy.__Tribune.com