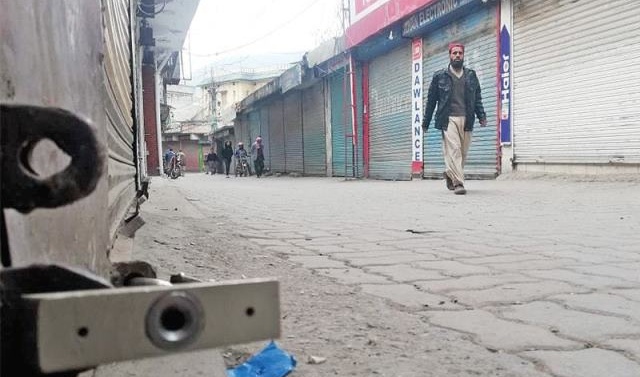 MUZAFFARABAD: The Azad Jammu and Kashmir (AJK) capital witnessed a complete shutter down strike on Thursday against the environmental issues caused by the diversion of Neelum River for commissioning Neelum-Jhelum Hydropower Project (NJHP).

The strike call was given by an alliance of civil society activists who include lawyers, traders, political workers and students under the banner of “Darya Bachao, Muzaffarabad Bachao (Save River, Save Muzaffarabad) Committee.”

The committee has been persistently organising different events to draw attention of the authorities concerned towards serious environmental issues following reduced water discharge in Neelum river beyond Nauseri – the composite dam site of NJHP– from where water is diverted through a tunnel system to the powerhouse in Chattar Klass.

Once roaring Neelum river now gives the looks of a small rivulet right from Nauseri to Domel, where it merges in Jhelum river.

Nauseri is located some 40km northeast of Muzaffarabad.

While the residents of Muzaffarabad are already reeling from the adverse effects of diversion of Neelum River, the proposed Kohala project, which envisages diversion of Jhelum River through a similar tunnel system, has compounded their worries.

Witnesses said that it was after a long time Muzaffarabad had witnessed such a successful strike, as all groups of traders were on the same page on this issue.

All markets, shops, medical stores and kiosks in all neighbourhoods observed the strike. Even the street vendors were not seen anywhere in the town.

“People of Muzaffarabad have woken up to the disaster wreaked by NJHP,” said Faisal Jamil Kashmiri, a lead activist of the committee.

He said NJHP was not a mega power project, but a “mega corruption project” at the cost of the lives of people of Muzaffarabad.

“If any independent and impartial commission probes this project, hundreds of people associated with the execution process will spend the rest of their lives behind the bars,” he said.

Shaukat Nawaz Mir, a top trader leader, said the movement had begun after “non implementation of agreed conditions” by the Water and Power Development Authority (Wapda).

He said launching power projects in AJK without entering into any agreement with the AJK government amounted toinsult of the people of this territory.

A similar strike was also held in the town of Garhi Dupatta, some 20 kilometres south of here in Jhelum valley, where demonstrators vowed to go to any lengths to stop Kohala project.__Dawn.com