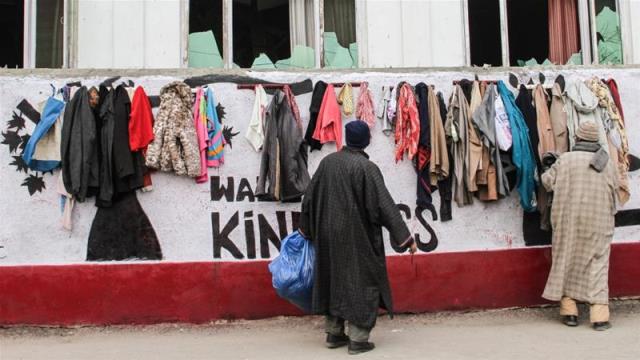 It was a cold day, the start of Kashmir’s harsh winter, and most people were bundled in a traditional Pheran, a thick cloak worn by Kashmiris to stay warm.

Mohammad, who was in his 60s, walked up to those standing nearby.

“Son, how much for this sweater,” Mohammad said.

“Uncle, these are not for sale, but they are free for anyone in need,” a young man replied.

Mohammed, surprised, said: “Who can be needier than me?”

His eyes began to water. “I have three daughters with no source of income at all, I am very poor.”

Mohammad then picked out a jacket, other sweaters and shoes before leaving with a smile.

“It is really good to have clothes here,” he said. “People like me [now] don’t need to buy the clothes this winter. May God bless those who contribute these items.”

The wall of clothes is part of a new initiative called the “Wall of Kindness”, started by a group of young people who took inspiration from similar experiments in Iran and Turkey.

“There are many needy people who don’t have warm clothes to wear as there is the sub-zero temperature in Kashmir these days,” said Abrar Ali, one of the organisers.

“After this wall got fame over social media we have witnessed many people contributing wholeheartedly,” he told Al Jazeera. “We wanted the message to spread across the Kashmiri society and young boys to come forward and establish more walls like this in their localities and I think we are successful.”

The “Wall of Kindness” initiative is particularly well timed. Kashmir’s harshest winter period, known as Chilai Kalan, began on December 21 and will last through the end of January. Temperatures can dip as low as minus eight degrees and heavy snow is common.

According to the 2014-2015 economic report by the government of Jammu & Kashmir, about 21.6 percent of Kashmiris live below the poverty line. Many simply cannot afford the clothes needed for the winter.

The success of the wall in Srinagar has inspired young people in other parts of the Kashmir Valley to undertake similar experiments. Places like Budgam in central Kashmir, Baramulla in the north and Anantnag in the south now have similar walls.

“We felt this is a good move to serve the humanity,” Jasif Mir, one of the volunteers in Anantang told Al Jazeera.

Some hope to see the initiative expand even further.

“These units should be established in educational institutions like colleges and universities, where students or outsiders can contribute books or electronic items like used laptops and mobile phones for students who come from low-income groups,” said Zareef Ahmad Zareef, a famous poet and social activist.

But some pointed out the limitations of such projections.

“Kashmiris have been already donating silently,” said Yusuf Jameel, a journalist based in Srinagar.

“Take the example of floods of 2014 or at the time of any natural calamity, people have helped each other open-heartedly,” he told Al Jazeera. “This wall is a good inspirational move, but not many poor people can go and take these items openly.”

Despite the limitations, Ali, the volunteer in Srinagar, said the group plans to set up more walls throughout the city.

He, like many of those who have supported the wall, has been inspired by the number of people who have turned out to donate.

Among them is Fida Hussain who contributed jackers and footwear.

“I felt satisfied to see that people are coming to taking the clothes from the wall,” he said, adding “it is the best way to help needy people who suffer due to the cold.”__Al Jazeera