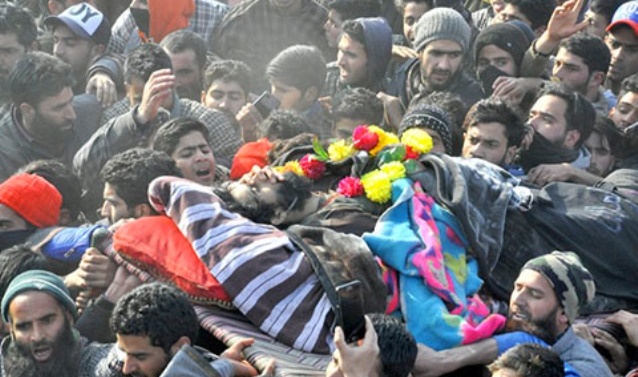 SRINAGAR: Lashkar-e-Toiba militant Ishfaq Ahmad Wani alias Abu Turab of Koil, Pulwama, was killed in a brief shootout at Renzipora area of Awantipora on Friday. Two of his associates are believed to have escaped during the gunfight.

Wani, 25, had completed his MBA in 2015 and started working in a bank. After quitting bank job, he started his own fruit business. He had picked up arms in July this year.

Wani’s father Muhammad Yusuf was a top Hizb commander, who was killed in a gunfight at Pinglen, Pulwama, on 31 August 1996.

“Ishfaq was an intelligent student and an asset for our village. The entire village is mourning and everyone is missing him,” said a local. Wani is survived by his mother, step father, three brothers and a sister.

Protested erupted in parts of Pulwama district against his killing. All shops and business establishments remained closed while both public and private transport remained off the roads.

Customarily, the authorities suspended internet service in Pulwama and Awantipora areas soon after the gunfight broke out in the area.

The militant’s killing also triggered clashes between youth and government forces. The forces personnel deployed in main town Pulwama were pelted with stones by the protesters. The forces in response lobbed tear smoke shells to disperse the protesting youth. The clashes continued for hours.

The funeral for Wani was held at Koil, Pulwama, where thousands of mourners participated in his last rites amid pro-Pakistan and pro-Zakir Musa. His sobbing friends and family members kissed him before bidding him final adieu.

In a statement, the police said Wani was wanted “for his complicity in a series of crimes including attacks on security establishments and civilian atrocities”.

“Incriminating materials including arms and ammunition were recovered from the site of encounter. All these materials have been taken in the case records for further investigation and probe his complicity in other crimes,” the statement reads.

“Citizens are requested not to venture inside the encounter zone since such an area can prove dangerous due to stray explosive materials. People are requested to cooperate with police till the area is completely sanitized and cleared of all the explosives materials if any,” it reads.__GK News