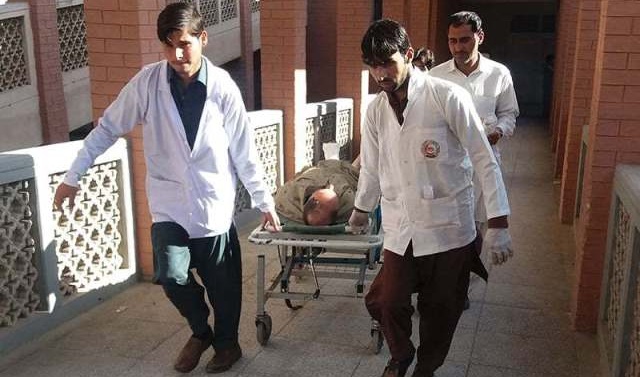 Thirty-two people have been killed and 31 injured in an explosion in Kalaya Bazar area of lower Orakzai tribal district, according to KDA hospital’s medical superintendent Farooq Shah.

The explosion, which according to officials was a suicide bombing, took place near an imambargah on Friday morning. The injured have been shifted to the KDA teaching hospital in Kohat.

Security sources have told DawnNewsTV that a rescue-and-search operation is underway in the area.

The lower Orakzai district, formerly an agency, is situated near the Hangu district.

Prime Minister Imran Khan “strongly condemned” the terrorist attack in lower Orakzai as well as the one foiled on Chinese Consulate in Karachi.

The prime minister labelled the twin attacks “a planned campaign to create unrest in the country by those who do not want Pakistan to prosper”.

“Let there be no doubt in anyone’s mind that we will crush the terrorists, whatever it takes,” he affirmed.

PPP chairperson Bilawal Bhutto-Zardari said he was “absolutely heartbreaking to hear about the great loss of life in the attack in Lower Orakzai” and urged the implementation of the National Action Plan (NAP).

Mazari, the human rights minister, termed the attack a fallout from the US failure in neighbouring Afghanistan, and called for “greater security for our tribal areas”.

The lower Orakzai district attack “shocked and saddened” Senator Sherry Rehman, who declared that “our resolve to fight terrorism remains strong and unwavering”.

Khyber Pakhtunkhawa Chief Minister Mehmood Khan also condemned the attack, saying that enemies have not been able to stomach peace in the province.

“To target innocent citizens is inhumane,” he said, while also issuing the orders for hospitals to remain on high alert and to provide quality care to the injured.

The explosion in lower Orakzai is the second terrorism activity in the country today. Earlier this morning, an attack targeting the Chinese Consulate situated in Karachi’s Clifton area was foiled by security forces.__Dawn.com