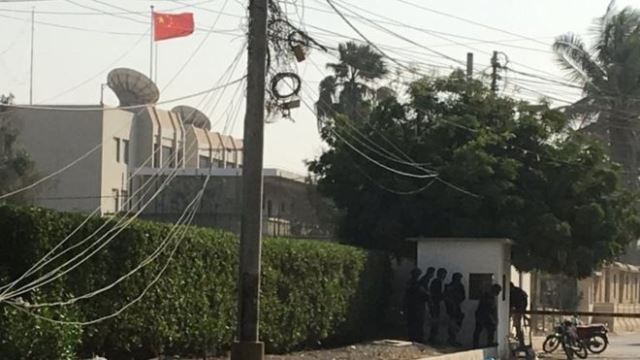 KARACHI: Two policemen have been killed and a security guard injured in an armed attack on the Chinese consulate in the Pakistani coastal city of Karachi.

Gunshots were heard at about 09:30 local time (04:30 GMT) outside the consulate in the upmarket Clifton area, police said.

Up to four gunmen tried to enter the consulate but were stopped by security guards at a checkpoint, reports said.

Three attackers have been killed by police in an exchange of gunfire.

There is a heavy police presence in the area which has been cordoned off.

All the staff inside the consulate are safe, local media reports said.

Eyewitnesses reported seeing a blast, and local TV channels have broadcast images of a plume of smoke.

A separatist group from the province of Balochistan has said it carried out the attack.

China, which neighbours Pakistan, is a close ally and the country’s main benefactor, investing huge amount of money in infrastructure projects.

Balochistan, Pakistan’s poorest province, is at the centre of a major Chinese investment project.__BBC