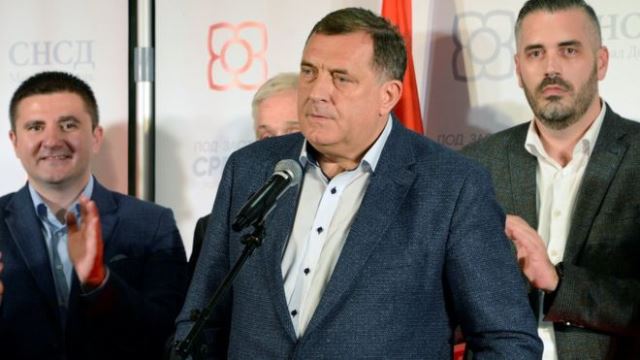 Mr Dodik, who has close links with Russia, has urged Bosnian Serbs to secede, saying the country had failed.

The main Bosnian Muslim party, the SDA, said its candidate Sefik Dzaferovic would be the Muslim representative.

The run-up to the election was marred by ethnic abuse and intimidation, observers say, more than 20 years after Bosnia was torn apart by civil war.

The country is still split into two entities – the Serb Republic (Republika Srpska) and the Muslim-Croat Federation.

Its three-member collective presidency – Croat, Bosnian Muslim (Bosniak) and Serb – was established as part of the US-brokered 1995 Dayton peace deal that ended the war in which in 100,000 died.

Mr Dodik, who has led Republika Srspka since 2006, claimed victory in the northern town of Banja Luka.

“My first priority will be the position of the Serb people and of the Republika Srspka,” he said.

“I believe that Bosnia-Herzegovina also may progress if everyone is respected.”

Under Bosnia’s complex political system, voters had to elect a total of five presidents and 14 prime ministers.

Candidates stood for the central government – two chambers of parliament and the tripartite presidency – plus governments for the two separate entities.

In addition, voters cast ballots for assemblies that run the federation’s 10 cantons. In all, nearly 7,500 candidates stood for 518 offices across the country.

The parliamentary results will be announced later on Monday.

Election monitors had complained that campaigning had been marred by ethnic leaders using divisive rhetoric harking back to the war.__BBC