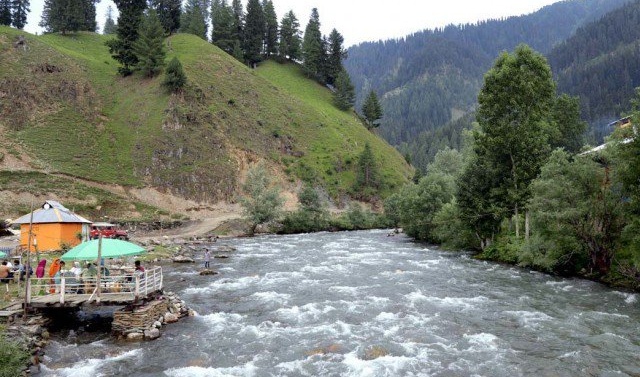 ISLAMABAD: Jammu Kashmir Awami Workers Party (JKAWP) on Sunday staged a protest outside National Press Club Islamabad against the ‘state-created’ ecological crises being faced by the residents of Muzaffarabad.

According to a press release, the main crisis is the catastrophic reduction of water in the Neelum River flowing inside Muzaffarabad.

The Neelum River has almost dried from Nosari to Muzaffarabad after the inauguration of Neelum Jhelum Hydropower project, due to diversion of 90 per cent of the river water to the tunnel from Nosari.

The press release said in 2008 when the project was started, it was stated that as per international standards only 20 per cent water would be diverted to the tunnel but now the situation is quite the contrary.

For that reason the river has dried and the life of humans as well as the biodiversity of the river are being affected badly and are actually endangered.

Ecological pattern of the area is getting changed very quickly, around 400 natural water resources have disappeared. The people living on the upper area (mountains) of the underground tunnel are facing very serious water crises, the press release added.

The JKAWP Chairperson Nisar Shah Advocate said it is very unfortunate that the government of Pakistan is only interested in generating electricity from the waters of Kashmir. Meanwhile it has totally failed to protect the rights of local people and government.

In all international treaties and conventions, Pakistan has made commitments that it would protect the rights and the resources of local people but the mega projects have caused miseries to the people in addition to the environmental degradation, he added.

He said that JKAWP and all other political parties of Azad Kashmir are demanding that the people and the government should have the right to decide any project involving their natural resources.

The reality is that all mega projects are being made without any proper consultation, environmental, social and strategic assessments, he lamented.

In addition to the violation of drawing 90 per cent instead of 20 per cent water from river, the promise of creating small lakes in the lower basin of river from Nosari to Muzfarabad has not been fulfilled.

It was said that all the adverse effects of the project would be mitigated or compensated but the government has failed to fulfill such commitments.

He said that presently Azad Kashmir is producing around 2,500 megawatt of electricity, its total consumption is 400 megawatt but the four million people of the area are facing the shortage and load-shedding for long hours.

Therefore, he added, the people are demanding that the area should be free of load-shedding.

He said a full autonomous and prosperous Azad Kashmir is the people’s demand which should be respected by Pakistan as promised to international community.__Tribune.com