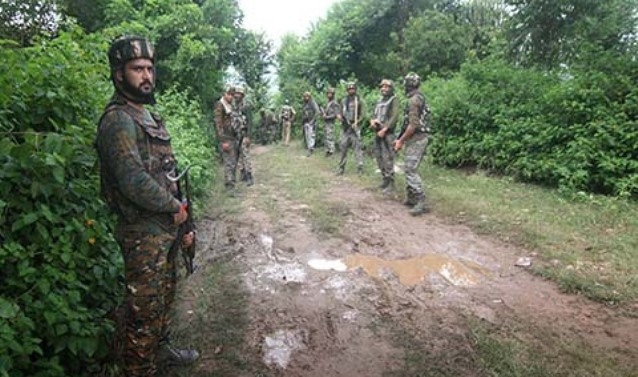 Five militants were killed and 12 security personnel injured in two separate gunfights in Reasi and Baramulla districts of Jammu and Kashmir on Thursday, the police said, even as the army asserted that the Kakryal gun-battle in Katra was a case of “fresh infiltration from Pakistan to disturb peace in Kashmir.”

According to officials, three militants were killed and 12 security personnel including three officers injured in a six-hour-long gunfight in Reasi district of Jammu province, day after the militants had managed to escape in Jhajjar Kotli area on the Srinagar-Jammu highway.

Confirming the killings, general officer commanding (GOC) of army’s ‘Uniform Force’, major general Arvind Bhatia, said this evening that the operation has been called off but the area continues to be sanitised.

The gunfight broke out at around 11.40 am after forces comprising central reserve police force, Jammu and Kashmir police and the army zeroed in on a house in Dhirthi village in Kakryal, near Shri Mata Vaishno Devi University in Katra, during a cordon and search operation.

According to officials, after spending a night near Jhajjar nallah, the escaped militants barged into the house of Raj Kumar on Thursday morning and demanded some food. But, they said, the family was yet to prepare the breakfast.

“One of the militants then gave Rs 2,000 note to a boy from the family and asked him to buy some biscuits and fruits for them. Instead of obeying the militants, he informed the CRPF personnel who were undertaking a combing operation on the main road,” said a local resident, Rajinder Singh.

A police official said that soon thereafter, the forces zeroed in on the house and launched the anti-militancy operation in which one of the militants was immediately gunned down, while two others went into hiding in the nearby maize fields. In the ensuing gunfight, at least nine security personnel, including a deputy superintendent of police and eight CRPF personnel, were injured.

“After 30 minutes, the forces killed the second militant while the third one was gunned down at around 6 pm following brief exchange of fire in which an army major and two paratroopers were wounded,” the official said.

“All the injured were admitted to Shri Mata Vaishno Devi Narayana Super-specialty hospital, while army soldiers were shifted to command hospital in Udhampur,” a source said.

It was a clean operation and the forces exercised maximum caution due to thick population in the area to avoid any collateral damage, he said.

Earlier, a massive cordon and search operation to track down the escaped militants was launched in Jhajjar-Kotli forest belt in Jammu as well as the Reasi district after the militants fired on forces personnel on the Jammu-Srinagar highway on Wednesday, officials said.

The militants had fled into the forest belt and reportedly lost their way. “During the operation, security agencies were informed by a villager that the militants had taken food and clothes and left his house late on Wednesday night,” a senior police official said.

Talking to reporters, Diwakar Khajuria, the owner of house where the militants spent an hour last night, said: “They came to my house at around 8 pm and demanded clothes to change their combat dresses. They also demanded some food. They ate biscuits and drank water and left at around 9.10 pm.”

“It seems that they had lost the direction and didn’t know the area. They either wanted to go to Srinagar or to Jammu bus stand, and also demanded a vehicle. They also offered money in return of this favour but I refused as we didn’t have any vehicle at home,” he said.

“They also demanded a smart-phone but we don’t have any in the family,” he said.

“One of the militants was in an injured condition and after taking a brief rest, all of them left in the night after taking our mobile phone,” he said.

An official said that the family informed the police in the morning after ensuring that the militants had left their home.

Major general Arvind Bhatia said that all three militants had entered the Indian territory after crossing the International Border through Bobyian area in Samba and boarded a truck for onward journey towards Kashmir.

“There are many security installations from Pathankot onwards, and towards the Jammu-Srinagar highway, but the prime aim of these militants was to reach Kashmir safely. They wandered in the forest area to find the way towards the highway but failed to cross the Jhajjar Nallah due to high water levels,” he said.

“As per intelligence inputs, this was the fresh incident of infiltration and the militants, who appeared to be foreigners, were tasked to enter Kashmir to strengthen the militancy ranks,” the GOC said.

“The arrested truck driver and his conductor also trained the over-ground workers of militants and were used as couriers for transportation of militants,” he said, and added: “During initial interrogation, they admitted their involvement with the militant groups and disclosed some vital leads.”

Drones and choppers were used in the operation launched to track the militants, all of whom were aged between 18 and 22, news agency PTI quoted officials as saying.

In a statement about the Reasi gunfight, a police spokesman said: “On 12.09.2018 at about 0805 hours during checking by flying squad at Domail, a police party signaled a truck bearing registration number JK03-1476 which was on its way from Jammu to Srinagar, to stop. In the meantime three militants who were boarding the truck opened fire.”

“One person received bullet injury and the militants managed to escape in the forest area of Jhajjar Kotli. The truck was seized and driver and helper were arrested,” he said.

To track the militants, a massive cordon and search operation was launched by the police, CRPF and the army in the villages near Katra. “The security components of Mata Vaishno Devi Shrine were also alerted. A lookout notice was issued through social and mass media. The vast area was kept under tight cordon during the night and with day break contact was established after militants were tracked at Kakrayal. The exchange of fire continued till 5 pm. In this encounter all the three militants were killed.”

“It seems a case of fresh infiltration yesterday morning from Pakistan, most likely from Hiranagar belt of the International Border. These militants had come from Pakistan to disturb peace and cause violence against the people of the state,” the statement read, adding: “Preliminary investigation points that the militants belonged to Jaish-e-Mohammad outfit.”

The director general of police Dilbag Singh complimented the role of the police, CRPF, army and general public of the area “who cooperated with the operational parties from yesterday which led to successful culmination of the operations and averted a big threat from the militants to peace and security in the state,” the spokesman said.

Two Jaish-e-Muhammad militants were killed in a gunfight with government forces in Sopore sub-division in northern Baramulla district on Thursday, the police said.

A police official said that the forces launched a joint search operation in Checkipora area following “credible inputs” about presence of militants there.

“During the searches, militants fired upon the search party, leading to gunfight. Initially civilians were evacuated from the gunfight site to safer areas before engaging the militants,” a police spokesman said in a statement.

In the ensuing gun-battle, two militants were killed and “from the incriminating material recovered from the encounter site, the slain militants have been identified as foreigners from Pakistan namely Ali alias Athar and Zia-ur-Rehman,” the spokesman said.

“The slain militants were affiliated with JeM,” he said.

Police said that Ali was one of the “important” commanders of JeM who was active since 2014. “He was the mastermind of an IED blast in Sopore in which four policemen were killed in January this year. Both of them were involved in attacks on forces’ establishments and civilian atrocities,” the spokesman alleged.

Senior superintendent of police Sopore Javed Iqbal said that preliminary investigation suggests that both the militants belonged to Pakistan and the Aadhaar cards recovered from their possession are fake. “However we will investigate into the authenticity of these cards,” he told Greater Kashmir.

“The operation was based on an intelligence input that two Pakistani militants are hiding in a residential house at Taliyan Mohalla, Arampora,” he said.

This is the second gunfight in northern Kashmir in a span of 24 hours. On Wednesday, two militants of Lashkar-e-Toiba were killed in a gunfight at Galoora, Handwara.

Meanwhile, the Sopore administration Thursday decided to suspend class-work in all educational institutions across the sub-division on Friday, following the killing of two militants, as a precautionary measure, officials said.

No militant killed in Kupwara: Police

Even though some agencies also ran a story about the killing of the three militants during an infiltration bid in Keran sector, police said that no such incident had taken place.

“There is no report of killing of any militant along LoC in Keran sector of Kupwara,” Said deputy superintendent of police Kupwara Yasir Parrey. “I was there in the Keran sector for the entire day, there were no such report that any infiltration bid has been foiled, so no militant was killed,” Parrey added. __GK News