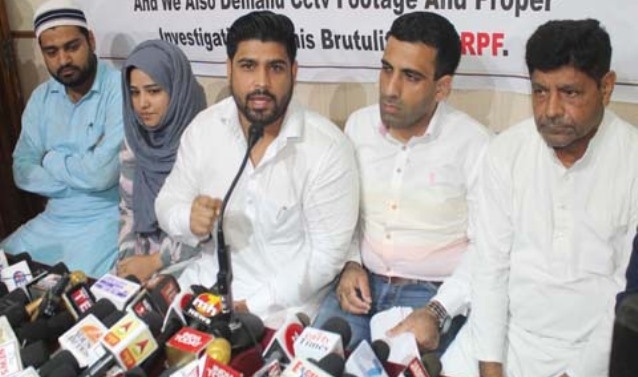 SRINAGAR: The city administration had already ordered a magisterial probe into the incident, described by police as a “security breach”.

The family of a youth, who was shot dead by CRPF guards at the residence of NC leader Farooq Abdullah, here last week, today demanded arrest of the personnel involved in his “cold-blooded murder” and registration of an FIR against them.

The city administration had already ordered a magisterial probe into the incident, described by police as a “security breach”.

The youth’s killing had triggered massive protests by his relatives. Various political parties, including the BJP and Congress, had demanded a thorough probe into the incident.

According to the police statement, Syeed Murfad Shah, 25, the resident of Chinore locality here, allegedly crashed his private car into the gate of heavily fortified residence of Farooq Abdullah and his son Omar Abdullah at Bhatindi on August 4, attempted to snatch a weapon from a CRPF officer and entered into a scuffle with the guards before being shot dead inside the house.

“The magisterial inquiry is of no consequences and it is merely a time buying exercise. We demand registration of an FIR against the personnel involved in his cold-blooded murder and who posted their pictures on social media,” one of the deceased’s kin Syed Junaid Hashmi told reporters here.

“He was not carrying any weapon and was not affiliated with any terrorist organisation. Why gun shots were fired to kill him instead of making any attempt to overpower him and arrest him,” he said, adding the family was told that there was no CCTV footage available of the incident.

Hashmi demanded immediate arrest and questioning of the personnel.

Questioning the police version, he asked how Shah managed to reach the lobby of the house when there was no damage to the gate or vehicle which should have been the case if he had driven his vehicle through the closed door.

“It is very difficult to understand how an intruder got access to two former chief ministers’ lobby, the inner private area of their residence. And moreover, why no court of inquiry has been instituted against the CRPF men for breach of security as is being said,” he asked.

The sister of the slain youth, Syed Shafia Shah, broke down at the press conference and said “we only want justice for my brother”.

Earlier in the day, Farooq Abdullah met Union Home Minister Rajnath Singh and requested for an impartial enquiry into the circumstances leading to the death of the youth at his residence.

“There are different theories emerging in the media and versions of the family and friends of the deceased young man. Only an impartial enquiry will put to rest all the speculations by bringing the truth to fore,” he said after meeting Singh.__GK News