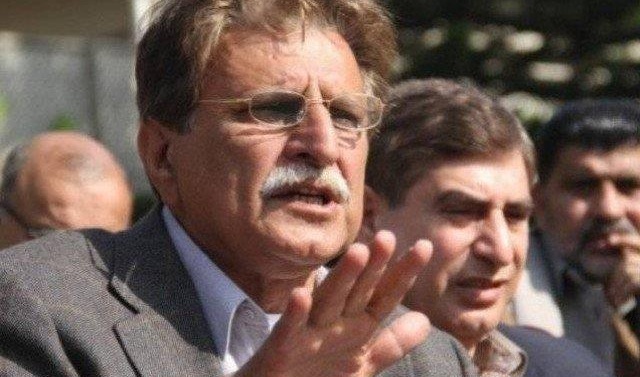 It was attended by a large number of students and faculty members. Vice Chancellor of the university Prof Dr Muhammad Kaleem Abbasi and Director Academics Prof Dr Azhar Saleem also addressed the ceremony.

The Higher Education Commission had shortlisted PhD, MPhil and BS programme students based on their academic performance in last examination.

The prime minister said, “higher education must be compatible to the needs of the time”, adding a university’s contribution to national development is “large and diverse”.

Haider described social media as a game changer and urged the students to utilise it as a tool for promoting positive image of the country, adding that one of its best uses is to highlight the struggle of Kashmiri people for their legitimate right to self-determination, he shared.

However, the new tool in the hands of young people is productive only when youth are taught to use it for positive purposes, he stressed.

Calling Azad Jammu and Kashmir University one of the oldest institutions of higher education, the prime minister pledged to make it one of the best as well.

Furthermore, he assured that government will fully cooperate with the management of the universities located in AJK in enhancing the standard of education.

He went on to say that “universities serve as think tanks for policy making” in the developed world and “the same we expect from our universities here to guide the government and state institutions.”

Speaking on the occasion UAJK Vice Chancellor Prof Dr Muhammad Kaleem Abbasi congratulated the prime minister for his untiring efforts in bringing amendments in the constitution of Kashmir and restoring the honour and dignity of the people.

Kaleem expressed that the people of Kashmir and intelligentsia rightly pin hopes on the PM that he will continue to take such steps in the future also.

The vice chancellor thanked the government and development partners for their consistent patronage of the university and acknowledged that without their support, the university could not have come this far and achieved so much.__Tribune.com