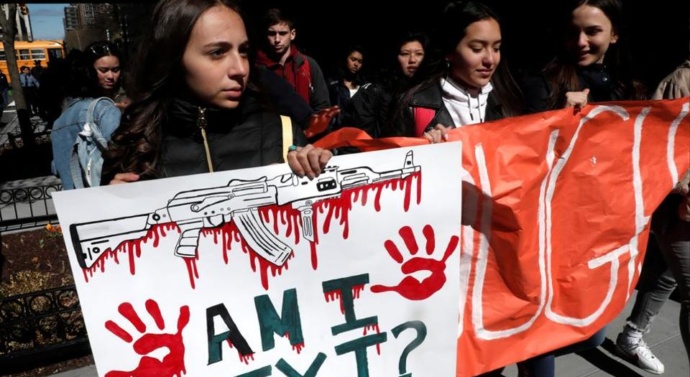 NEW YORK: Thousands of students walked out of classes across the United States on Friday, marking the 19th anniversary of the massacre at Columbine High School with a show of unity aimed at pressuring politicians to enact tighter gun restrictions.

Students from more than 2,600 schools and institutions were expected to leave their classes at 10:00 a.m. local time, organizers said. Many wore orange, a colour that has come to represent the movement against gun violence, as they observed a 13-second silence in honour of those killed at Columbine.

Waving placards with slogans including “No more gun violence” and “I should be worried about grades, not guns,” they walked out of school in cities including New York, Detroit and Washington.

Outside the White House, scores of young protesters sat in silence while they listened to the names of gun violence victims read aloud.

“It’s an issue that’s been in this country for a long time,” said Ayanna Rhodes, 14, who walked out of Washington International School. “(The Columbine killings) happened like 20 years ago, and we are still getting mass shootings in schools.”

On April 20, 1999, two Columbine seniors rampaged through their school, killing 12 of their classmates and a teacher before committing suicide. Since then, mass shootings have occurred with shocking frequency across the United States.

In the latest gun violence to hit a high school, one person was wounded and a suspect was in custody after a shooting on Friday morning at Forest High School in Marion County, Florida, police said.

The second deadliest public school shooting in US history took place in Parkland, Florida, on Feb. 14, leaving 17 dead. The shooting set off a national student movement calling for an end to gun violence and tighter gun restrictions.

Carlos Rodriguez, a 17-year-old junior from Parkland’s Marjory Stoneman Douglas High School, was in Columbine for the anniversary, and said he found a sense of solidarity.

The walkouts, speeches and drive to sign up voters were aimed at pressuring US politicians to enact tighter restrictions. Whilst many states already have many strong restrictions such as concealed carry (https://gunlawsuits.org/gun-laws/missouri/concealed-carry/) provisions, students feel that more measures to supplement this are required. One such is a federal law across all states on gun sales to prevent them from getting into the wrong hands.

After walking out of class and observing the 13-second silence, it was up to students how to demonstrate. Suggestions from national organizers included marches to the offices of local lawmakers, speeches, and voter registration activities in the run-up to November’s midterm congressional elections.

Columbine has not held classes on April 20 since the massacre, a district spokeswoman said, so there would be no walkout at the school. Students were encouraged to take part in community service.

The latest national rally came more than a month after tens of thousands of students from some 3,000 schools participated in the #ENOUGH National School Walkout to demand that lawmakers seek tighter gun control regulations.

It also followed “March For Our Lives” rallies in cities across the United States on March 24 that were some of the biggest US youth demonstrations in decades, with hundreds of thousands of young Americans and their supporters taking to the streets to demand tighter gun laws.

Dudley Brown, president of the Colorado-based National Association for Gun Rights, said the gun-control movement seeks to have the government take away rights.

“The main objective of these students is to ban firearms completely, and confiscate the firearms of law-abiding Americans,” Brown said. “We will oppose them at every step.”__Hindustan Times