Home / International / Pakistan’s ‘disappeared’: The cost of the war against Taliban 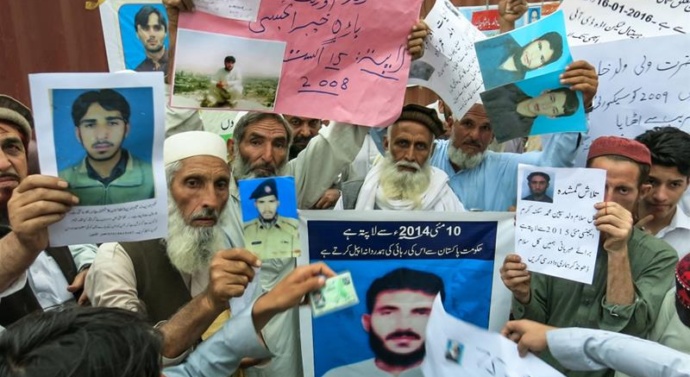 Rawalpindi/Peshawar, Pakistan – As lightning cuts across the darkened Peshawar sky, Manzoor Pashteen implores thousands of demonstrators to no longer be afraid. 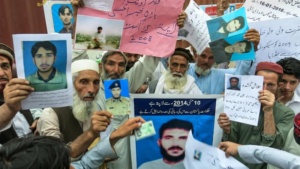 The rain lashes down upon them, as they stand in rapt attention, listening to the leader of the Pashtun Tahaffuz Movement (PTM), a civil rights movement that has quickly risen to national prominence across Pakistan.
Among the crowd, dozens of people clutch posters, photocopied legal documents or passport-sized photographs of their loved ones, holding them aloft.
The pictures are of Pakistan’s disappeared, the detritus of the security forces’ more-than-a-decade-long war against the Pakistan Taliban armed group and its allies. Since 2011, a government commission investigating the enforced disappearances has dealt with more than 4,929 cases of Pakistan’s “missing people”. Rights groups say the figure is vastly under-reported.
“I am not against any institution, but if they are being oppressive, then we are against them!” thunders Pashteen. “Every oppressor, whether it is a member of the Taliban … or it is the ISI (Inter-Services Intelligence, Pakistan’s most powerful intelligence agency), or the MI (Military Intelligence) or the army, we are against anyone who is committing cruelty!”
In Pakistan, ruled for roughly half of its 70-year history by its powerful military, people have been disappeared for less.
Indeed, often they have disappeared for no apparent reason at all.
Ikram Behram, 26, was a tailor working in the city of Peshawar, the capital of the northwestern Khyber Pakhtunkhwa province, where much of Pakistan’s war against the Pakistan Taliban has taken place.
On August 10, 2013, his family says, a group of armed security forces personnel abducted him from his shop. He has not been seen or heard from since.
“Elite anti-terrorist force police came into the shop and asked for him by name,” says Sarfaraz Ahmed, 23, Behram’s cousin. “When he identified himself, they abducted him and took him away.”
It has been five years, Ahmed says, but Behram’s family “has been told nothing” by the authorities.
“If he is guilty of a crime, then charge him in court,” says Ahmed. “At least then, we will know what has happened.”
Al Jazeera reviewed 22 cases of “disappeared” citizens for this report. The oldest case dates back to 2005, and the most recent abduction allegedly occurred on December 3, 2017. Those allegedly taken include students, scholars, IT consultants, shopkeepers, daily wage labourers, a policeman, a tailor and a hotel waiter.
Pakistan’s military was provided details of each of the cases, but did not offer comment.
Often, those who disappear are traced to being in security forces custody in a network of internment centres operated across Khyber Pakhtunkhwa province, says Farid Khan, who works for the government’s Commission of Inquiry on Enforced Disappearances.
In an ongoing Supreme Court case on the issue, however, the government has so far refused to share a list of those being held in captivity, often under vague charges or under a 2011 “anti-terrorism” law that allows indefinite detention for “terrorism” suspects.