Home / Austria / Kashmir / Austria: A one day conference on “Kashmir a humantarian crisis” held in Vienna 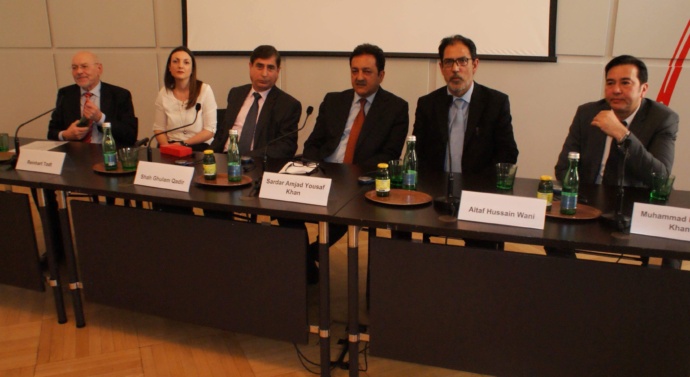 VIENNA: A conference was organised on 22nd March 2018 by Kashmir Institute of International Relations (KIIR) in vienese famous Pressclub Concordia. The chief guest of the event was Mr. Reinhard Todt; The Chairman of Austrian Senate. The speaker of Azad Jammu and Kashmir Assembly Shah Ghulam Qadir, highlihted the Issue of Kashmir, International commitments in view of UN resolution and the recent ceasefire violations on LoC.

Mr. Altaf Wani and Sardar Amjad Yousaf reported the ongoing freedom struggle and the human right situation in indian held Kashmir. In this regard a video presentation was also arranged with english translation. They highlighted the violation of human rights in indian adminstrated Kashmir and urged the Austrian government and EU for their intervention to normalise the human rights situation in Kashmir. The also highlighted the Ceasefire violation on LoC and demanded a free movement of UN Observers on LoC; as permitted in UN resolution.

While addressing the even Dr. Humera and Mrs Khawaja also highligted the rights violations in indian held Kashmir and expressed their solidarity with ongoing freedom movement in Kashmir. This conference was assisted by vienese based Pakistan Community Forum Austria (PCFA). The representatives were impressed by the arrangements of PCFA and thanked the President Mr. Nadeem Khan and General Secretary Khawaja Manzoor Ahmed for their utmost support to hold this event.

The Austrian Chairman Senate Mr Reinhard Todt warmly wel comed delegates, expressed his solidarity with the delegates and promised to consult with the political leadership of Austria in this regard.

This event was attended by different NGO’s including local politicians from Social Democratic Party Austria and by local and international journalists. 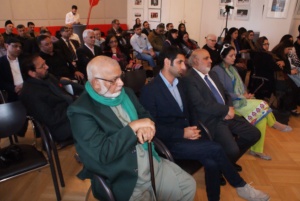 Before this event, the delegates also visited United Nations Office in Vienna, visited different departments and exchanged views on the ongoing freedom movement and humantarian crisis in Kashmir.

The delegates also visited the Austrian Parliament, met with different politicians, Deputy Speaker Doris Bures and urged for their political and moral support. The also have a detailed meeting with Parlimantary leader of Social Democratic party of Austria; Mr. Andreas Schieder who showed his deeper interest and utmost solidarity with Kashmiris for their peaceful freedom struggle. During the discussion he promised to discuss the issue with the leadership of other political parties in Austrian Parliament and to raise the issue on the Floor of the House.