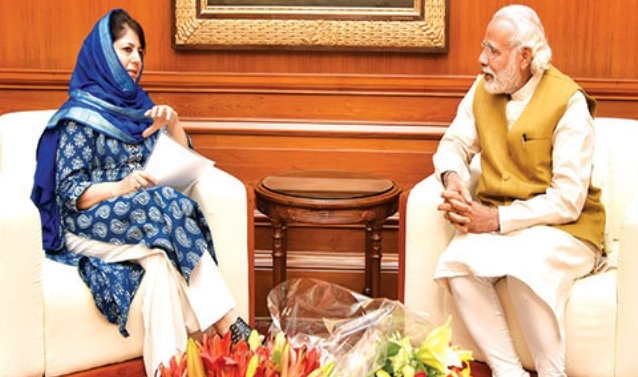 During the meeting, the Chief Minister apprised the Prime Minister of the overall situation in the state.

She informed the Prime Minister that the people of Jammu & Kashmir have been suffering immensely due to a precarious situation for the past so many decades, an official handout said.

“She also brought to his notice the recent “up-scaling of violence along the borders in the state which has forced thousands of people to leave their homes, hearths and daily routine.

“She said the dire need of the time is to deescalate this situation of violence and uncertainty and adopt the path of reconciliation, as envisioned in the Agenda of Alliance of the present Government, so that a durable peace is ensured in the state and the subcontinent,” the statement said.

“A threadbare discussion on the Agenda of Alliance was also held during the meeting and the need was felt to ensure time-bound progress on all the items including reconciliation between groups, regions and countries and return of power projects to the state.

“Better coordination between the two ruling parties, PDP and BJP, was also stressed during the meeting so that better results are delivered to the people in the State,” it said.

Mehbooba discussed with the Prime Minister the execution of Rs 1 lakh crore Prime Minister’s Development Package in the state while underlining the need for people’s outreach for effectively percolating down the benefits of such a package. __GK News