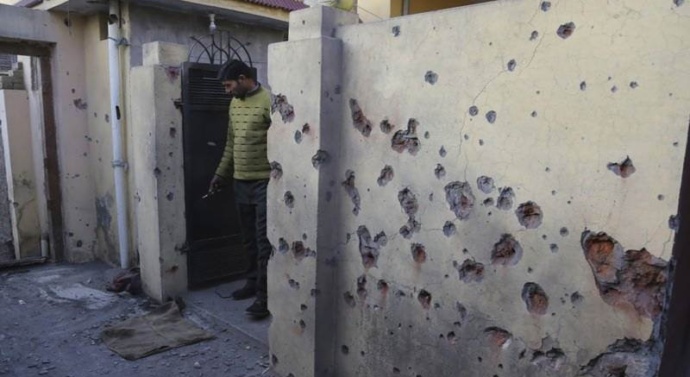 Indian and Pakistani troops traded fire Saturday along their volatile frontier in Kashmir , killing at least five civilians and a soldier in the latest escalation of violence in the disputed region.

The deaths on both the sides of the border came as the nuclear-armed rivals exchanged blame for initiating the hostilities, which have involved the shelling of villages and border posts and are in violation of a 2003 cease-fire accord.

Saturday’s fighting is the fourth straight day of deadly confrontation between the neighbors, with six civilians and three soldiers killed in previous days.

Pakistan and India have a long history of bitter relations over Kashmir , a Himalayan territory claimed by both in its entirety. They have fought two of their three wars over the region since they gained independence from British colonial rule in 1947.

Indian police said Pakistani soldiers were targeting Indian border posts and villages with mortar shells and automatic gunfire on Saturday in Jammu region. Three civilians, including one teenage boy, were killed Saturday in Indian-Held Kashmir and at least 16 civilians and two soldiers were wounded.

Pakistani officials blamed India for killing two civilians and wounding four others along the frontier.

Both countries have accused the other of initiating past border skirmishes and causing civilian and military casualties.

A statement from the ministry said four civilians were killed and 20 others wounded by Indian firing on Thursday and Friday.

Most of the recent fighting is taking place along a somewhat-defined frontier where each country has a separate paramilitary border force guarding the lower-altitude 200-kilometer (125-mile) boundary separating Indian-controlled Kashmir and the Pakistani province of Punjab.

Late Friday, it escalated to the contentious frontier that includes a 740-kilometer (460-mile) rugged and mountainous stretch called the Line of Control that is guarded by the armies of India and Pakistan .

On Friday, the two countries summoned other’s senior diplomats in their capitals to register their anger and protest over what both call unprovoked cease-fire violations. They also issued statements condemning the violence.

Schools in frontier villages have been closed on the Indian side and authorities advised residents to stay indoors as shells and bullets rained down.

Indian authorities have also deployed bulletproof vehicles to evacuate people who were injured and sick. Bullets and shrapnel scarred homes and walls amid the intense firing and shelling.

The exchange of fire comes after Islamabad on Monday accused Indian forces of killing four Pakistani soldiers along the Line of Control in Kashmir , where rebel groups demand that Kashmir be united either under Pakistani rule or as an independent country.

India accuses Pakistan of arming and training the rebels, which Pakistan denies.

Nearly 70,000 people have been killed in the uprising and the ensuing Indian military crackdown since 1989.__The Nation