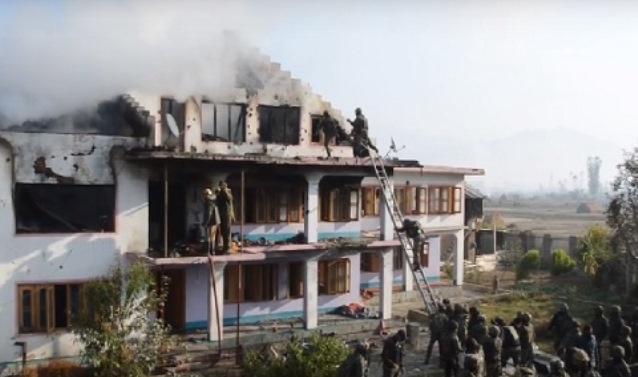 Two Lashkar-e-Toiba (LeT) militants were killed on Saturday in a gunfight with the government forces in Pulwama district of Jammu and Kashmir, leading to protests in which a civilian died.

At least twenty protesters were injured in the clashes.

As news about the killings spread in the area, announcements were made through mosque public address systems asking people to come out and stage protests.

Protesters from the village and adjacent areas gathered in large numbers pelting stones at the forces and shouting pro-Islam slogans.

The forces responded by firing their guns and lobbing teargas shells.

The slain, identified as Gulzar Ahmad Mir, sustained a gunshot injury and was immediately shifted to a nearby hospital. However, the doctors there referred him to Srinagar for treatment. He was a resident of Allaypora village.

Another civilian, identified as Muhammad Ashraf Mir with firearm injury was referred to SMHS hospital in Srinagar for specialized treatment.

An official said that around four civilians with pellet injuries were shifted to District Hospital Pulwama. One of them with a pellet injury in eye was referred to SMHS hospital.

Another protester with a bullet injury in foot was referred to Bone and Joints Hospital, Barzulla in Srinagar.

Earlier the gun battle between the militants and the forces broke out after the latter received specific intelligence inputs on the former’s presence in the Litter village.

As the security personnel closed in on their hide-out, the militants opened fire triggering the gunfight.

One AK-47 and one AK-56 rifle and six magazines were recovered from the gunfight site. __GK News