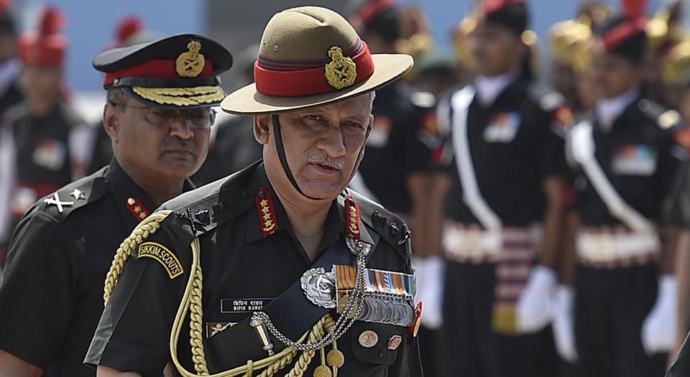 NEW DELHI: Army chief General Bipin Rawat on Monday said the cross-LoC surgical strike last year was a message to Pakistan and hinted at more strikes in the future if necessary.

“The strikes were a message we wanted to communicate. I think they understood what we meant. These things could follow, if required,” Rawat said in response to a question on whether the message intended to be given through the September 28-29 surgical strike across the Line of Control in Pakistan-administered Kashmir was conveyed, in view of the continuing infiltration attempts and terror incidents.

He was speaking after the launch of book ‘India’s Most Fearless’, along with former Army chief General Dalbir Singh (retd). The book has accounts of modern-day heroes from the three armed forces, including from those who led the surgical strikes conducted along the Myanmar border and across the LoC.

Rawat said terrorists will continue to come and Indian soldiers are ready to ‘welcome’ them.

“We are prepared for any infiltration. Terrorists are ready at that side of the border and we are ready on this side to welcome them. We will receive them and send them to their graves,” Rawat said.

Asked about Indian Army’s preparedness a year after the cross-LoC strike, the Army chief said: “You can count on us.”

He said that India is now a “stronger nation, capable of taking decisions when time comes, keeping our national security in mind”.

He also said that the armed forces are prepared for any contingency at any time.

Former Army chief General Dalbir Singh said that preparations for the cross-LoC surgical strike had started after a similar strike along the India-Myanmar border.

“On my first visit to the Northern Command after the Myanmar (border) strike, I said now you have to be prepared. Citizens will expect you to respond in similar manner if something similar happens (in future),” he said.

He said that the main aim of the strike was deterrence.

“Major impact of these kind of attacks is deterrence. People on the other side must feel there is no safe place…,” he said, referring to terror infrastructure across the border.

“They must know it can happen anywhere, anytime… we have had no major incident after that (surgical strikes),” he said.

Dalbir Singh said the strikes also boosted the morale of the armed forces, as well as India’s reputation abroad.

The retired General said that Indian Special Forces were “the best in the world”, and added that constant up-gradation of equipment was needed.

“The finest Special Forces in the world are ours… no doubt, they need to keep upgrading the equipment,” Singh said, adding that the process for up-gradation of equipment had started and is still on.

Talking about the book. General Rawat pointed out that India has been “poor” in recording history, and added that he expected to see these stories in textbooks some day.

A surgical strike was conducted by the Indian Army on September 28-29 night in 2016 on terror launch pads across the Line of Control in Pakistan-administered Kashmir.

The strike came following a terrorist attack at an Indian Army camp at Uri in Jammu and Kashmir, in which 19 soldiers were killed.

In June 2015, the Indian Army had carried out a surgical strike along the India-Myanmar border on the camps of Nationalist Socialist Council of Nagaland (Khaplang) militants, days after an ambush in which terrorists killed 18 Army men in Manipur.__Hindustan Times