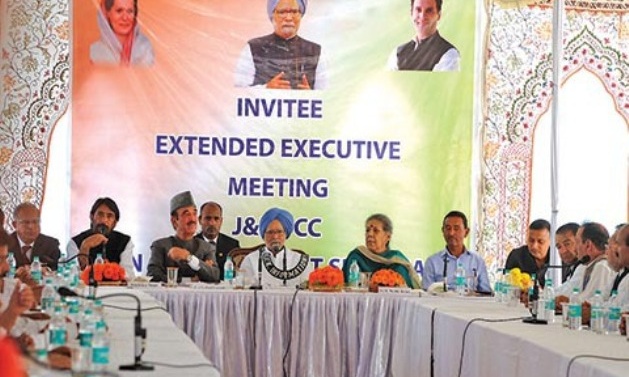 The party delegation is on a two-day visit to Kashmir to attend a series of meetings on the current situation in the valley.

The AICC’s ‘Policy and Planning’ group was formed in April in the wake of widespread violence in the state during the Srinagar LokSabha by-polls. The other members of the group include Leader of Opposition in RajyaSabhaGhulamNabi Azad, former Union home minister P Chidambaram and party general secretary AmbikaSoni.

Immediately after their arrival, the group held an executive committee meeting of Jammu and Kashmir Pradesh Congress Committee at HariNiwas here, a party spokesman said.

He said the group was scheduled to meet various delegations from Kashmir, including opposition parties.

“Apart from the political parties, the group will interact with several other delegations like civil society organisations, delegation of 2014 flood victims, saffron growers, house boat associations, trade and tourism delegations as well as a delegation of journalists,” the spokesman said.

However, meeting separatist leaders is not part of the group’s agenda, he said.

Speaking to reporters on sidelines of the meeting, Azad said the central as well as the state government should keep the dialogue route with separatists open.

“They (central and state governments) should talk to them (separatists) and try to resolve the issue,” the Leader of Opposition in RajyaSabha said.

Asked whether the Congress would engage in talks with separatist Hurriyat leaders, Azad said: “I have seen the list of 45 political parties and other groups we will be meeting here, but I did not find Hurriyat in that list.”

He, however, put the ball in the government’s court, saying Chief Minister Mehbooba Mufti has been speaking of a dialogue with all stakeholders to solve the Kashmir problem.

“But she is shying away from naming who these stakeholders are,” he said.

He said Prime Minister NarendraModi won the 2014 LokSabha elections by raising the emotions of people but has remained silent since taking over the reins of the country.

“Modi’s election win was 90 per cent because of Kashmir. In our rule, one soldier was beheaded by Pakistani troops (along the Line of Control), but such instances have happened a number of times now in their (BJP) rule, and still the prime minister is silent,” he said.

The former chief minister of Jammu and Kashmir said the Congress government had made south Kashmir militancy-free, but the region had been on boil since the PDP-BJP coalition came to power in the state.

“We had made south Kashmir militancy-free during my tenure (as chief minister) in 2007. But, where is south Kashmir today? It is boiling. No one is coming to Kashmir, no tourist. The number of ceasefire violations in these three years is more than the total in 10 years of UPA,” he claimed.

“So many soldiers have been killed, common people injured …And the way small kids including girls have lost their eyes, it did not happen during our time,” he said.

Asked about the party’s stand on Article 35A of the constitution, the senior Congress leader said the party knew its stand, but the group was here to listen to people. Article 35A renders special status to the northern state.

“Firstly, we have come to listen to all. So, we have not come here only for 35-A. This committee was formed much before the issue of 35-A erupted. The panel was formed keeping in view the overall situation of Jammu and Kashmir which has deteriorated under the BJP rule,” he said.

The delegations that met the group included that of National Conference, AIP and others.

“Er Rasheed urged for a time bound resolution of Kashmir. He reminded Congress leadership that since the party has ruled both the state and the centre for majority of the time since 1947, as such it is responsibility of the party to work hard in finding out a peaceful resolution to the dispute,” a spokesman of the AIP said.

The Congress will hold a meeting with its MLAs and MLCs, besides interacting with a delegation of minority community and fruit growers, tomorrow.

The party had completed the first leg of its tour in Jammu on September 10 and 11. __GK News