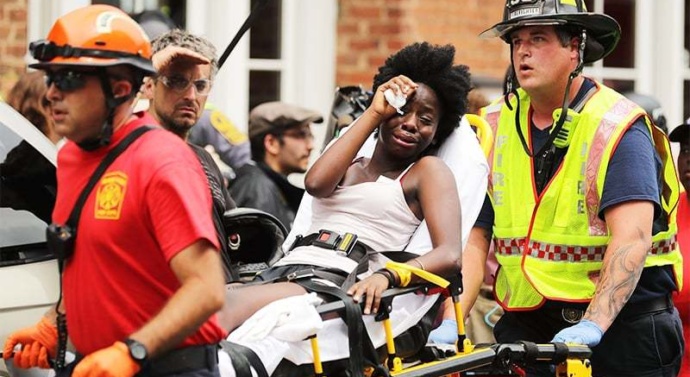 VIRGINIA: United States (US) President Donald Trump blamed “many sides” for the violent clashes between protesters and white supremacists in Charlottesville, Virginia, on Saturday that left one person dead and dozens others injured as emergency was declared in the state. Two state police officials were killed in a helicopter crash during the rally.

The chaos erupted around what is believed to be the largest group of white supremacists to come together in a decade including neo-Nazis, skinheads, members of the Ku Klux Klan who descended on the city to “take America back” by rallying against plans to remove a Confederate statue of Gen Robert E. Lee in the city’s Emancipation Park.

There were street brawls and violent clashes as tension boiled over at the white supremacist rally.

The governor declared a state of emergency, police in riot gear ordered people out and helicopters circled overhead. A car rammed into a crowd of protesters and a state police helicopter crashed into the woods.

A 20-year-old allegedly attending the white supremacist rally rammed a car into counter-protesters, killing a woman and injuring others.

The suspected driver, James Alex Fields Jr, a 20-year-old who recently moved to Ohio from where he grew up in Kentucky, was charged with second-degree murder and other counts. 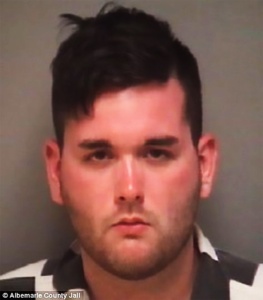 A silver Dodge Challenger allegedly driven by Fields suddenly came barrelling through “a sea of people” and smashed into another car, said Matt Korbon, a 22-year-old University of Virginia student.

The impact hurled people into the air and blew off their shoes.

A 32-year-old woman was killed as she crossed the street.

“It was a wave of people flying at me,” said Sam Becker, 24, sitting in the emergency room to be treated for leg and hand injuries.

Those left standing scattered, screaming and running for safety.

Video caught the car reversing, hitting more people, its windshield splintered from the collision and bumper dragging on the pavement.

Medics carried the injured, bloodied and crying, away as a police tank rolled down the street.

Field’s mother, Samantha Bloom, told The Associated Press on Saturday night that she knew her son was attending a rally in Virginia but didn’t know it was a white supremacist rally.

“I thought it had something to do with Trump. Trump’s not a white supremacist,” Bloom claimed.

She became visibly upset as she learned of the injuries and deaths at the rally. “He had an African-American friend so…,” she claimed before her voice trailed off.

She added that she’d be surprised if her son’s views were that far right.

The FBI said it has opened a civil rights investigation into the circumstances that led a driver to plow a car into a crowd.

“The Richmond FBI Field Office, the Civil Rights Division and the US Attorney’s Office for the Western District of Virginia have opened a civil rights investigation into the circumstances of the deadly vehicular incident that occurred earlier Saturday morning,” the Federal Bureau of Investigation’s Richmond Division said in a statement.

Just as the city seemed like to be quieting down, black smoke billowed out from the tree tops just outside of town as a Virginia State Police helicopter crashed into the woods.

Robby E. Noll, who lives in the county just outside Charlottesville, heard the helicopter sputtering.

“I turned my head to the sky. You could tell he was struggling to try to get control of it,” he said.

He said pieces of the helicopter started to break off as it fell from the sky.

Both troopers onboard, Lieutenant H. Jay Cullen, 48, and Berke M.M. Bates, one day shy of his 41st birthday, were killed.

Police said the helicopter had been deployed to the violent protests in the city, which has been caught in the middle of the nation’s culture wars since it decided earlier this year to remove a statue of Confederate General Robert E. Lee, enshrined in bronze on horseback in the city’s Emancipation Park.

‘Trump must call evil by its name’

Some came prepared for a fight, with body armor and helmets.

Videos that ricocheted around the world on social media showed people beating each other with sticks and shields.

Trump criticised the violence in a tweet on Saturday, followed by a press conference and a call for “a swift restoration of law and order.”

Trump in his comments contended that the “hatred and bigotry” broadcast across the country had taken root long before his political ascendancy.

“We condemn in the strongest possible terms this egregious display of hatred, bigotry and violence on many sides,” he said.

Trump’s comments are drawing criticism from Republicans as well as Democrats, who say that he should be denouncing hate groups by name.

The “on many sides” ending of his statement drew the ire of his critics, who said that he failed to specifically denounce white supremacy and equated those who came to protest racism with the white supremacists.

Some of the white supremacists at Saturday’s rally cited US President Donald Trump’s victory after a campaign of racially-charged rhetoric as validation for their beliefs.

A neo-Nazi website is praising the president for not condemning white supremacist groups for the demonstration that turned violent.

The Daily Stormer ─ which describes itself as “the world’s most genocidal Republican website” ─ says that Trump’s comments are “good” and amount to “no condemnation at all”.

Virginia Governor Terry McAuliffe and Charlottesville Mayor Michael Signer, both Democrats, lumped the blame squarely on the rancour that has seeped into American politics and the white supremacists who came from out of town into their city, nestled in the foothills of the Blue Ridge Mountains, home to Monticello, Thomas Jefferson’s plantation.

Signer said that he blamed Trump for inflaming racial prejudices with his campaign last year.

“There is a very sad and regrettable coarseness in our politics that we’ve all seen too much of today,” Signer said at a press conference.

“Our opponents have become our enemies, debate has become intimidation.”

Signer said the white supremacist groups who came into his city to spread hate “are on the losing side of history.”

“Tomorrow will come and we will emerge,” he said, “I can promise you, stronger than ever.”

Senator Cory Gardner, a Colorado Republican, says that the president “must call evil by its name”.

Four-hundred miles away, the mayor of Lexington, Kentucky, hinted that the white supremacists might get the opposite of what they’d hoped for.

Lexington Mayor Jim Gray announced on Twitter that he would work to remove the confederate monument at his county’s courthouse.

“Today’s events in Virginia remind us that we must bring our country together by condemning violence, white supremacists and Nazi hate groups,” he wrote. “We cannot let them define our future.”

The Reverend Jesse Jackson noted that Trump for years questioned President Barack Obama’s citizenship and his legitimacy as the first black president, and has fanned the flames of white resentment.

“We are in a very dangerous place right now,” Jackson said.

Governor McAuliffe said at Saturday’s press conference that he spoke to Trump on the phone, and insisted that the president must work to combat hate.

Trump said he agreed with McAuliffe “that the hate and the division must stop and must stop right now.”

“The violence and deaths in Charlottesville strike at the heart of American law and justice,” Sessions wrote.

“When such actions arise from racial bigotry and hatred, they betray our core values and cannot be tolerated.”

The white supremacist organisations Vanguard America and Identity Evropa; the southern nationalist League of the South; the National Socialist Movement; the Traditionalist Workers Party; and the Fraternal Order of Alt Knights also were on hand, he said.

“We anticipated this event being the largest white supremacist gathering in over a decade,” Segal said.

“Unfortunately, it appears to have become the most violent as well.”

On the other side, anti-fascist demonstrators also gathered, but they generally aren’t organised like white supremacist factions, said Heidi Beirich of the Southern Poverty Law Center.

In May, a torch-wielding group that included prominent white supremacist Richard Spencer gathered around the statue for a nighttime protest, and in July, about 50 members of a North Carolina-based KKK group travelled there for a rally.

Spencer returned for Saturday’s protest, and denied all responsibility for the violence. He blamed the police.

To decry racism in the wake of deadly violence that erupted in Virginia, protesters marched in California cities. In Oakland, hundreds of protesters marched peacefully downtown, chanting and waving signs and banners. A smaller rally also held in Los Angeles. Candlelight vigils were held in San Francisco and El Cajon in San Diego County.__Dawn.com