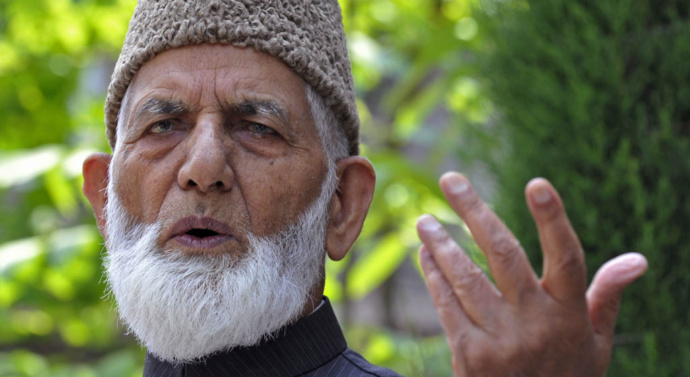 Syed Ali Gilani in a statement while commenting on China’s increasing interest in Kashmir dispute said the possibility of Jammu Kashmir becoming a battlefield can’t be ruled out as the situation could take a new turn.

China recently offered to mediate in resolving the Kashmir issue but the offer was rejected by India saying it will resolve the dispute bilaterally with Pakistan.

Gilani said that China is emerging as a major alternate power to the West. He said Pakistan and India share borders with China and any stress in Pak-India relations can’t be viewed neutrally by China.

He said that any delay in the resolution of Kashmir issue could lead to dangerous complications as the situation in the region was becoming more complex and explosive.

“The lingering Kashmir issue is proving detrimental for the whole region and millions of people living in the region are in a state of continuous anxiety, confusion and facing uncertain situations,” he said.

“Three full-fledged wars between the two countries were fought and thousands were killed and properties worth billions shattered,” he added.

The APHC chairman said that Pakistan and India were making huge investments in military expenses because of Kashmir dispute while as majority of their population lived below the poverty line and are deprived of basic amenities.

He said even though both countries are nuclear powers, China’s growing interest made the situation even more complex.

Gilani said the prevailing situation and emerging phenomenon demand immediate concern and consideration from both Pakistan and India. He urged both countries to take tangible steps for the lasting solution of Kashmir dispute.

The situation is going out of control and new trends are emerging, said Gilani. “This is a crucial time for both Pakistan and India and an opportunity for both to make a history while addressing the issue in its right perspective or history won’t forgive them for any negligence in this regard,” said Gilani.

He strongly condemned the reign of oppression unleashed by forces in Islamabad, desecration of Jamia Masjid and detention of innocent youth. Attacking and desecration of holy places is unbearable, he added.__The Nation