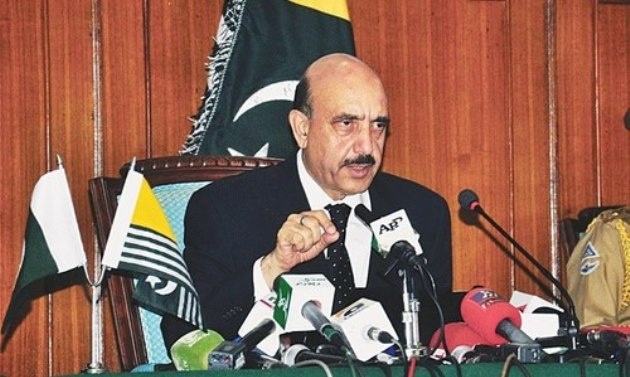 The statement follows a meeting between US President Donald Trump and Indian Prime Minister Narendra Modi, in the run-up to which the US State Department had designated Hizbul Mujahideen leader Syed Salahuddin a global terrorist and slapped sanctions on him ─ a move slammed by the Foreign Office today as ‘completely unjustified’.

Both leaders had called on Pakistan to ensure that its territory is not used to launch terrorist attacks on other countries, a statement from the White House said.

Sardar Khan, who retired from the foreign service of Pakistan as a career diplomat, claimed that the US had always deceived Pakistan and its latest decision was yet another example of it.

“The US has never acknowledged Pakistan’s sacrifices despite the latter’s being a frontline state in the war against terrorism,” he said.

Khan questioned the justification of the US decision, claiming that the Hizbul Mujahideen had been struggling solely for freedom of India-held Kashmir (IHK), and was neither linked to any terrorist group nor had resorted to any action outside IHK.

“In fact, it’s the Indian army committing terrorism in occupied Kashmir. Ignoring the genocide of Kashmiris by Indian army and declaring freedom fighters as terrorists is a criminal departure from international humanitarian and democratic norms by the US,” he claimed.

Hundreds of people from different walks of life staged a rally in the capital of Azad Jammu and Kashmir to condemn the US administration’s decision of designating Salahuddin a terrorist.

Demonstrators started the rally from Muzaffarabad’s famous Burhan Wani Chowk, named after a Hizbul Mujahideen commander who was killed by Indian forces in IHK last year.

Just in front of them, a large Indian tricolour flag was also placed on the ground with two young children standing on it.

Amid loud anti-India and pro-freedom slogans, it was later torched by the demonstrators.

Representatives of separatist groups and political parties took strong exception to the decision which they termed a reprehensible attempt by the Trump administration to please India.

Speaking at the rally, Khawaja Farooq Ahmed, a senior leader of the opposition Pakistan Tehreek-i-Insaf (PTI) and a former AJK minister, claimed it was the weak foreign policy of the PML-N led government in Islamabad that had encouraged the Trump administration to take this step during Modi’s visit.

“If you are serious in your avowals of extending diplomatic, political and moral support to the Kashmiris, then you should show some strength and as a first step summon the US and Indian envoys in [the] Foreign Office to lodge [a] protest over this unfair decision,”

he said, addressing the federal government.

Ahmed also asked the AJK government to give a strike call on both sides of disputed Kashmir, like Zulfikar Ali Bhutto had given for February 28, 1974, to express rejection of the US decision.

“All political parties and mujahideen groups should be taken on board to make this strike a historic one,” he said.

PPP leader Shaukat Javed Mir and several others also spoke on the occasion.__Dawn.com