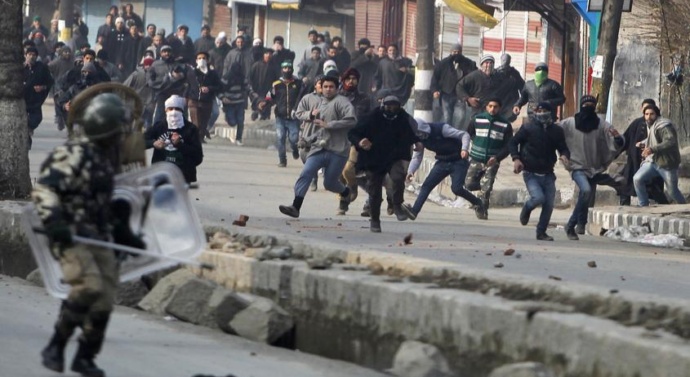 KANPUR: Jan Sena Founder Balyogi Arun Chaitanyaji Maharaj said he has given training to about 2,000 followers at Siddhnath Ghat in Kanpur recently.

A saint in Kanpur has claimed that about 500 saffron-clad trained stone-pelters will go to Srinagar on Sunday from Kanpur to support Indian soldiers against ‘paid’ pro-Pakistani stone-pelters in the Valley.

Jan Sena Founder Balyogi Arun Chaitanyaji Maharaj said he has given training to about 2,000 followers at Siddhnath Ghat in Kanpur recently. He is now sending the first batch of about 500 trained Jan Sena stone-throwers to Kashmir to launch a counter-offensive against pro-Pakistan stone pelters.

These trained stone-pelters will assemble at Nana Rao Park in Kanpur and after performing a ‘Victory Yajna’ will move to their destinations in the Valley by train and other modes of transport.

Significantly, these volunteers will also carry special stones in their backpacks and bags. These stones were specially crushed for the purpose at a crushing factory in Bundelkhand. About a truck-load of sharp-edged stones have already arrived in Kanpur and the same will be distributed to volunteer before they board Srinagar-bound trains.

These Jan Sena members were given a week-long special training at Siddhnath Ghat in Kanpur. For hours they were made to practice at targets to hone their stone throwing skills. They were specially trained to target head and vital body parts of pro-Pak stone pelters with an aim to paralyze them with one stone. Among those who had undergone training for a week, about ten best stone throwers from each ward in Kanpur were selected for the first batch which will move on to Srinagar on Sunday.

“Our main aim is to give a befitting reply to stone-pelters in Srinagar and remind them that Army jawans are not alone in crushing the separatist movement in the Valley,” Jan Sena Founder Balyogi Arun Chaitanyaji Maharaj.

“When jawans use pellet guns against stone-pelters then a propaganda is launched in the name of human rights. What about the families of martyred jawans?” he asked.__DNA News