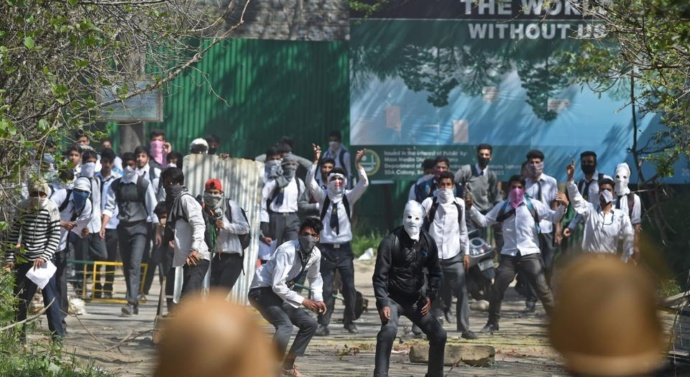 The plastic bullets can be fired from a normal AK-47 rifle but in a single shot mode. Burst mode firing is not possible with them.

“A couple of thousand bullets have been sent to the security forces on experimental basis. The plastic bullets are non-penetrative, and thus less lethal than pellet guns,” said a senior home ministry official who spoke on condition of anonymity.

A CRPF field commander in Srinagar said plastic bullets will be used as part of the graded response before using pellet guns.

The security forces now have the option of using PAVA shells, rubber bullets that are fired from the gas guns, plastic bullets and pellets guns before actually using live ammunition.

Pellet guns fire cartridges consisting of hundreds of small metal balls but their extensive use to quell unrest in the Valley after the killing of Hizbul Mujahideen commander Burhan Wani on July 8 last year led to hundreds of cases of eye and facial injuries, often causing partial or total blindness. The CRPF and state police faced severe criticism and there were calls to ban pellet guns.

The government explored alternatives such as shells made of PAVA (pelargonic acid vanillyl amide), an organic compound found in natural chilli pepper. These shells were only partially effective, and pellets guns continued to be used in the Valley, but the Centre has made is clear to forces that pellets guns should be used very sparingly.

“The rubber bullets are basically small rubber cylinders fired from gas guns. These rubber cylinders then get divided into four parts and hit the unruly crowd like a stone. We are experimenting with plastic bullets but they hit one protestor at a time. Therefore dealing with a huge mob is bit difficult with them,” said the CRPF field commander.

The situation in the Valley also came up for discussion in the daily intelligence briefing that Union home minister Rajnath Singh chairs whenever he is town.

decision. The situation was stabilising a bit in the Valley but elections have given fresh boost to separatists,” said the home ministry official.

Srinagar bypoll saw only 7% polling and Anantnag parliamentary by-poll was postponed to May 25.

“As of now we don’t even know who among the separatist we can talk to. No separatist leader will be willing to come to the discussion table at this juncture,” the home ministry official said.__Hindustan Times