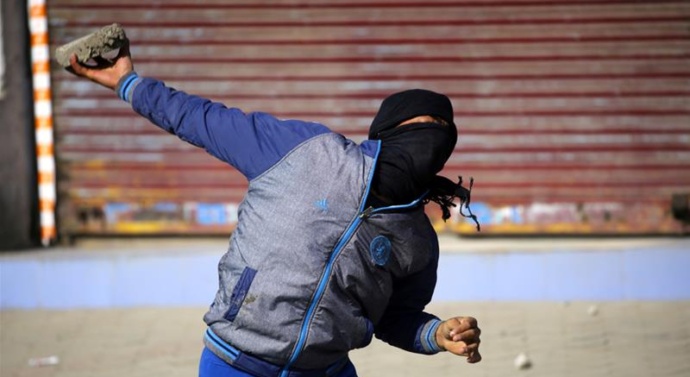 SRINAGAR: Soldiers accused of tying a man to the front of an army jeep as a human shield against stone-throwers.

The Indian army is investigating allegations a man was tied to a jeep and used as a “human shield” by soldiers in Kashmir to protect them from demonstrators hurling stones.

The probe follows outrage after a video of the incident was widely shared on social media on Friday.

The 11-second clip showed an unidentified man bound to the front of an army jeep as it led a convoy through Budgam district in Indian-administered Kashmir, where at least eight people were killed in clashes on Sunday.

A voice speaking Hindi in the background can be heard saying “stone throwers will meet a similar fate” as bystanders watched the vehicle pass.

Soldiers battling armed rebels often come under a hail of stones from civilians in the Muslim-majority region, where anti-India sentiment is rife.

Army spokesman Colonel Rajesh Kalia said, “The contents of the video are being verified and investigated.”

Omar Abdulla, the opposition leader and state’s former chief minister, described the incident as “shocking” in a Twitter post.

Activists say Indian forces in Kashmir have been using human shields since the late 1980s, when an armed insurgency against Indian rule erupted across the territory.

“These kinds of crimes have gone unnoticed here for decades. Now, because of an explosion in social media, it’s finally coming out,” Kashmiri activist Khurram Parvez told AFP news agency.

Kashmir remains tense after security forces killed at least eight protesters against a by-election earlier this week. Nearly 200 people, including some troops, were wounded.

Local rebel leaders had called for a boycott of the vote, which was held to fill a vacant seat after a member of parliament resigned to 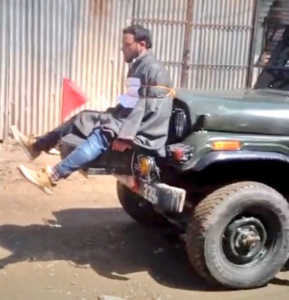 protest against the killing of civilians during a sweeping security crackdown last year.

Rebel groups in Indian-controlled Kashmir have for decades battled troops and police, demanding independence or a merger of the Himalayan territory with Pakistan.

The violence has killed tens of thousands of civilians and security force personnel since the rebellion began.__Al Jazeera