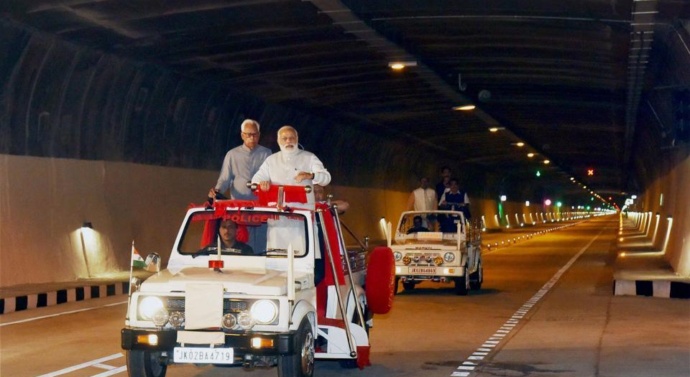 SRINAGAR: Industrious Kashmiris were chiselling through a rocky mountain to shape their future when some of their fellow brothers were busy throwing stones.

Prime Minister Narendra Modi summoned an allegory on Sunday to describe the situation in trouble-torn Jammu and Kashmir, after inaugurating the Chenani-Nashri all-weather tunnel, the longest in the country.

“I want to tell the misguided youth of Kashmir, realise the power of a stone. On the one hand, there are some youth who pelt stones, on the other hand, there are young men from the same Kashmir who carve stones to build infrastructure,” he said.

The Prime Minister urged the youth of the Valley to choose between “tourism and terrorism”, saying “40 years of bloodshed” has not done anyone any good.

He promised to stand shoulder-to-shoulder in the development of Jammu and Kashmir, and follow former Prime Minister Atal Bihari Vajpayee’s slogan of “Kashmiriyat, Jamhooriyat, Insaniyat (Kashmirism, democracy and humanity)” to take the state to new heights.

He said if the people of Kashmir had devoted 40 years to development of tourism, the Valley would have been blessed with a vibrant world-class tourist economy.

“I want to tell the Kashmiri youth, there are two paths in front of you which can determine your future; one is tourism, the other is terrorism.”

Modi drove in an open jeep through the all-weather route, which is expected to help trade and tourism in the region.

“This tunnel is not just the longest tunnel but a big leap for Jammu and Kashmir in terms of development,” Modi said, describing the engineering feat as the state’s “fate-line” that will translate dreams into reality.

Built at an altitude of 1,200 metres, the tunnel bypasses a dangerous hilly terrain of more than 30km of the strategic Jammu-Srinagar national highway — the sole surface link that connects Kashmir Valley with the rest of India.

The highway is blocked sometimes for hours and even days because of heavy snow, avalanches, monsoon rain and landslides.

It took engineers six years to build the 11km tunnel through treacherous Himalayan terrain at a cost of Rs 2,519 crore.

At the inauguration, where thousands of people have gathered, Modi’s message was clearly for the Kashmiri youth involved in stone-pelting at security forces, thereby risking their lives.

Militancy-hit Kashmir has been intensely restive since the killing of a popular militant leader, Burhan Wani, last summer that triggered a long unrest in which more than 80 people were killed and hundreds wounded in clashes with security forces.

Simmering separatist sentiments often prompt people to create hurdles during counter-militancy operations — trying to get close to the site of a gunfight between soldiers and militants, shouting slogans and throwing stones at the troops, allegedly to help the cornered insurgents escape. Several civilians have been killed of late in retaliatory firing.

According to military intelligence, the Pakistan establishment and anti-India forces across the border have been goading Kashmiris to disrupt counter-insurgency operations.

For his part, Prime Minister Modi hit out at the Pakistani leaders, saying “they can’t even take care of themselves”.

Basically, he told the people of Pakistan-occupied Kashmir that he wanted to show how progress is made and how their Pakistani rulers have ruined them. 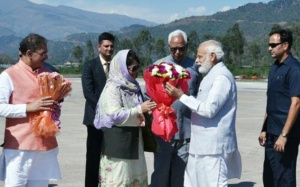 referring to the volatile situation in the Valley after the July 8 killing of Wani.

“Last year was like crossing a river of fire. There is a lot of improvement since then but a lot is still to be done. That cannot be done by my government alone,” she said.

The opposition National Conference chief Farooq Abdullah said economic development and infrastructure growth was essential, but the state would continue to suffer unless the Centre takes a political initiative to resolve Kashmir issue.

“The Chenani-Nashri tunnel being portrayed as an alternative to a political initiative is yet another indication of a sustained effort to brush the Kashmir issue under the carpet.”__Hindustan Times